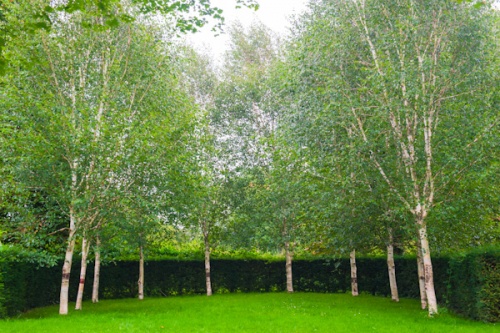 A cathedral of a different sort; a peaceful green space created with different varieties of trees planted in the traditional shape of a cathedral, with wide green avenues forming a nave, chancel, choir, chapels, cloisters, and transepts.

The cathedral, which covers 26 acres, was begun in the interwar years in an effort to foster ‘Faith, hope and reconciliation’.

The cathedral plantation covers an area of some 9.5 acres. It was the brainchild of Edmond K Blyth, who wanted to create a lasting memorial to the fallen of WWI and also offer hope for the future, a space to foster a sense of reconciliation based on faith.

Blyth was a cadet at Sandhurst Academy in 1916, and while there he formed deep friendships with three other cadets, all of whom died in the War.

It was not until 1930 that he had the vision of creating a tree cathedral. Blyth visited Liverpool Cathedral, then in the process of being built, and on his way home he drove through the Cotswold Hills just as the evening sun hit a stand of trees on a hillside beside the road, and at that moment he had a vision of a cathedral of living trees that would act as a memorial to his dead friends but also as a vision of hope for humanity.

Though work began on the Whipsnade site in 1932, it had to be put on hold during WWII, and it was not until after the war that the cathedral was finally finished. The first service was held in 1953, and services continue today. The cathedral holds an interdenominational service in June (phone for details) and several different faiths have held services here.

The cathedral is designed with chapels representing each of the four seasons. A wide variety of trees are used, from horse chestnut to hornbeam, silver birch to Scots pine, plus several varieties of cedar and cherry. Shrubs are incorporated into the design, including privet, holly, hazel, dogwood, and laurel to name just a few.

We visited the Tree Cathedral on a grey, damp day. In fact, it began to rain heavily after we'd only been exploring for 30 minutes or so. Despite that, I loved the cathedral. There was something incredibly moving about the peaceful environment. You can easily make out the shape of the different parts of the cathedral, though it certainly helps if you are at least vaguely familiar with features of a normal cathedral, like chapels, nave, chancel, and so on.

The cathedral is free to visit at any time. Though owned by the National Trust and part of the Trust's Dunstable Down and Whipsnade Estate, the cathedral is cared for by Whipsnade Tree Cathedral Fund, who look after religious use of the site. 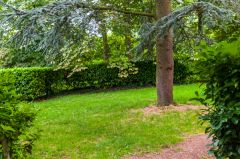