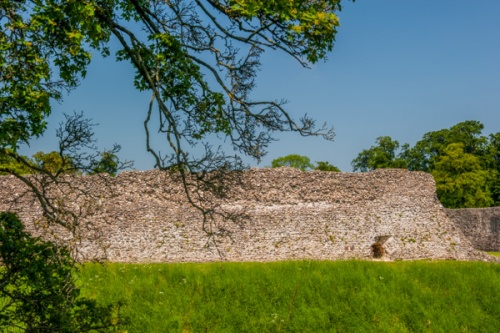 The well-tended ruins of an important 11th-century motte and bailey stronghold built by William the Conqueror's half-brother, the Earl of Cornwall. Extended by Thomas Becket, besieged by the French Dauphin, and rebuilt by Edward, the Black Prince, Berkhamsted is one of the most impressive motte and bailey castles in England.

The origins of Berkhamsted Castle are lost in the mists of time. It was probably built by Robert, Count of Mortain, shortly after the Norman Conquest. It first emerges as the place where William the Conqueror officially received the surrender of the English nobles after the Battle of Hastings.

After the battle William marched his army into the English heartland, burning and plundering as he went. He reached Berkhamsted, where he was met by Archbishop Ealdred of York, the bishops of Hereford and Worcester, the British earls Morcar and Eadwin, and a delegation of leading London citizens. The British wisely offered William the crown of England, and he proceeded from Berkhamsted to London for his coronation.

We know that the castle was mentioned in the Domesday Book of 1086 as belonging to Mortain, and it was almost certainly he who built the first timber fortification around 1070. Count Robert was William's half-brother, and William named him Earl of Cornwall after the Norman success at the Battle of Hastings. 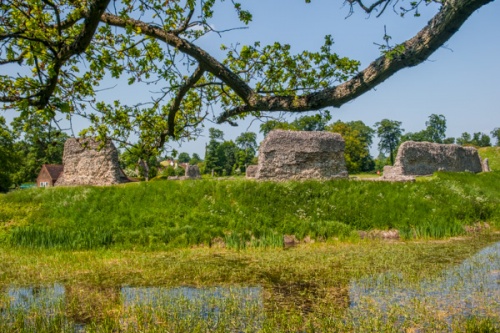 The curtain wall across the moat

Count Robert may have played the game of politics shrewdly, but the same cannot be said for his son, who made the mistake of supporting Robert of Normandy against Henry I following William's death. When Henry emerged victorious he confiscated Berkhamsted Castle.

During the 12th century, the castle was rented to tenants by the crown, among them Thomas Becket, Archbishop of Canterbury, who was resident from 1155-65. Masonry from Becket's tenancy still stands, though money to pay for it came from the royal purse! The extensive curtain wall was probably built by Becket. When Henry II quarrelled with his 'troublesome priest', the honour of Berkhamsted was removed and Becket was ousted.

Following the death of King John in 1216, the French Dauphin Louis made a bi for the English throne. The Dauphin's armies besieged Berkhamsted for 2 weeks until the garrison surrendered. 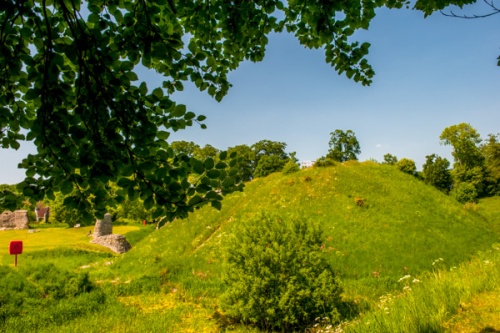 In 1225 Henry III once more granted Berkhamsted to the Earl of Cornwall in the person of his brother Richard, the 'King of the Romans', known as the richest man in England at that time. Berkhamsted became the administrative centre for the Earldom of Cornwall, which seems rather odd considering its location in Hertfordshire, but the Earl was active at his brother's royal court in London, so Berkhamsted was a convenient focal point for his estates.

Richard expanded the west tower to create a palatial residence. Though the remains of the palace are only fragmentary now, you can still see the chapel and undercroft. Richard died here in 1272, as did 2 of his wives and his son, Edmund.

In 1337 the link with Cornwall was solidified when Berkhamsted became a possession of the Duchy of Cornwall. One owner was Edward, the Black Prince (1330-1371) who enclosed the deer park that surrounded the castle. He also stayed here with his wife Joan, the Fair Maid of Kent, following their marriage in 1361.

An earlier guest, though not one who enjoyed the experience, was the French king, John the Good, who was captured at the Battle of Poitiers in 1356 and kept a prisoner at Berkhamsted. 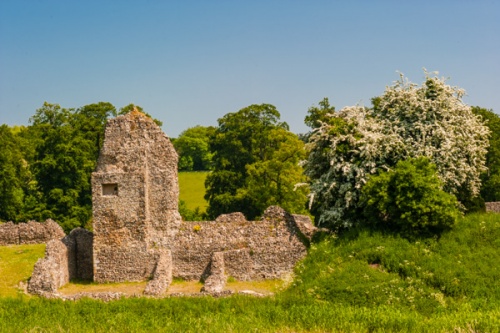 Ruins of the Earl of Cornwall's palace

By the middle of the 14th century, the castle was beginning to show its age, and it finally fell out of use completely in the Elizabethan period.

Though the perimeter of the castle site is bounded by modern roads, it is still a classic example of a moated motte and bailey castle. At the north-east corner of the site is a tall, conical motte, or castle mound, with a moat cutting across the bottom of the motte. The top of the motte is practically bare now, but it would originally have had a timber hall, or keep.

From this motte a long, high curtain wall extends around the large, circular bailey where all the subsidiary buildings were located. The bailey is enclosed by a very high double ditch with another rampart wall between.

The inner ditch was filled with water until the last 50 years, and there is still water in some places along the outer ditch. Odd earthwork bastions project from the bailey ditch, perhaps built as trebuchet platforms during the Dauphin Louis' siege of Berkhamsted. 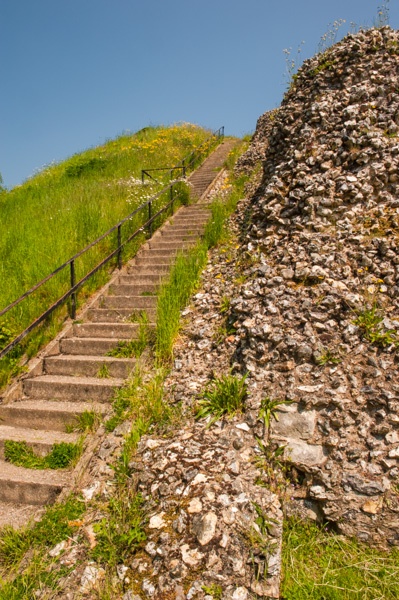 Three semi-circular towers still stand to a good height. It is not certain when these were built, but it is possible they were erected during Becket's tenancy, which would make them extremely early examples of this type of stone tower.

On the west side of the curtain wall are remains of a large rectangular stone building, probably built by Robert, Count of Cornwall, in 1254.

I parked in the town centre parking area beside the supermarket and walked to the castle. It is perhaps just as well I did, for parking seems a bit of an issue at the castle site. There were parking areas along White Hill Road, but it seems a game of chance whether you can find a spot.

That said, I was amazed at the castle; I honestly didn't expect to be so impressed, but Berkhamsted is BIG! I walked along the exterior earthwork defences, looking across the wide moat to the far side of the castle enclosure, and I couldn't help but be struck by the sheer scale of the castle.

The stone wall still stands to full height for long stretches of the bailey enclosure, and though the stone keep atop the motte is gone, if you stand on the motte and look across the site you can't help but be impressed. Note that the building inside the castle enclosure is not original! It is a 19th-century cottage for the site custodian. It is now a private dwelling, though what a location for your front garden! 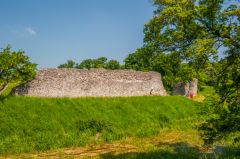 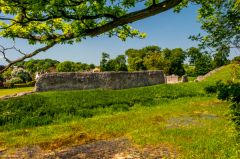 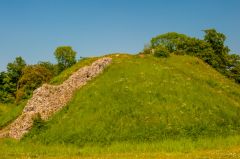 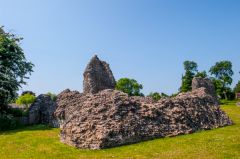 More self catering near Berkhamsted Castle >>