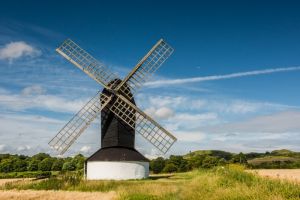 Pitstone Windmill is one of the earliest examples in Britain of a windmill. Pitstone may date to the late 16th century and was built to a post mill design. The mill, set in the attractive Chiltern countryside, has been fully restored. It stands directly on the Ridgeway Trail long-distance footpath on the edge of the parish boundary between Pitstone and Ivinghoe villages.

The 16th/17th-century builders of Pitstone knew what they were doing, for the mill remained in continuous use until the early 20th century when a heavy storm caused severe damage. The mill was practically derelict, and pieces of wood were carried off for firewood and brass fittings pilfered from the ruin. The tail ladder fell apart and the sails disintegrated.

The mill was gifted to the National Trust and restored to working order in 1937. Though it is possible to run the mill, the sails tend to cause fierce shaking, and for that reason, they are seldom used.

Though the date of 1627 is generally used, the actual date may be much earlier. The 1627 date is just one of several dates found carved on beams. It seems quite possible that this date simply marks one of the numerous repairs to the building over several centuries. If the mill is indeed older, it may well be the earliest post mill in Britain. Records in the Buckingham County Museum show payments made to carpenters working on the mill in the period 1624-1628, but there is no indication of how old the mill was at that date.

Dendrochronology tests carried out on the timber beams suggest that the oldest beams come from trees felled in the 1590s. If the beams were used immediately after being cut this would make Pitstone the oldest dated postmill in England.

The mill is shown on the Duke of Bridgwater's estate map of 1762. The earliest recorded mill owner was James Burt, named in the 'Posse Comitatus' of 1798.

The mill ground grain into flour for the nearby villages. So important was it to the local economy that even after the advent of the Industrial Revolution the mill continued to be repaired and updated. The Canal Company owned the mill in the early 19th century. In 1842 they sold it to Francis Beesley.

In 1874 Beesly sold the mill to the 3rd Earl Brownlow, owner of the neighbouring Ashridge Estate. In 1902 a severe gale damaged the mill so badly that it did not make economic sense to rebuild it. It was left derelict until the early 1920s when it was purchased by the Hawkins family, tenants on the property. The Hawkins family donated the mill to the National Trust in 1937, but the Trust lacked the money to restore it. It was not until 1963 that a group of volunteers joined together to form the Pitstone Windmill Restoration Committee. The volunteers gradually restored the mill building at their own expense. It began milling once more in 1990.

The mill machinery is intact, including the brakewheel and windshaft. There are two very different types of grindstones; a fine French Burr and a coarse Peak stone. These two types of stone allowed the mill to grind fine flour for human consumption and coarse grain for animal feed. The sails cannot be used as they cause the mill structure to shake heavily.

A post mill pivots the entire structure around a central post, or pillar. A long wooden beam known as a tail beam provides leverage, and the entire mill is turned to catch the wind. This is quite different from later mills where just the top part of the mill pivots. Because the entire structure is rotated manually to catch the wind there was no need for a fantail or shuttered sails. The milling machinery in the tower is reached by a flight of external stairs.

The windmill is accessible at any time. It stands on the Ridgeway Trail, in a farm field just outside Ivinghoe. If you arrive by car, there is a small, free parking area at the edge of the field, on the minor road from Pitstone village to Ivinghoe. The mill is usually open Sunday afternoons throughout the summer but it is a good idea to check first on the National Trust website.

The Pitstone Windmill is part of the vast Ashridge Estate, managed by the National Trust. Miles of footpaths dissect the estate, offering wonderful walks, and you can climb the Bridgwater Column for panoramic views over the Chiltern countryside. 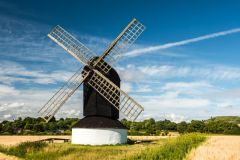 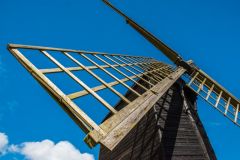 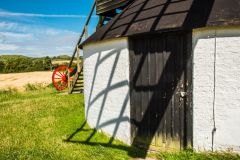 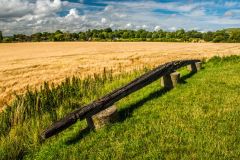 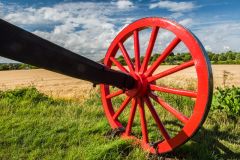 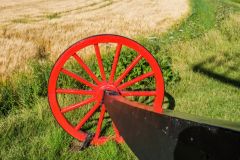 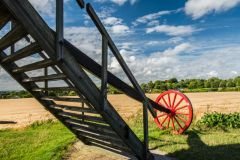 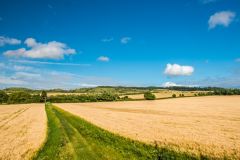 More self catering near Pitstone Windmill >>