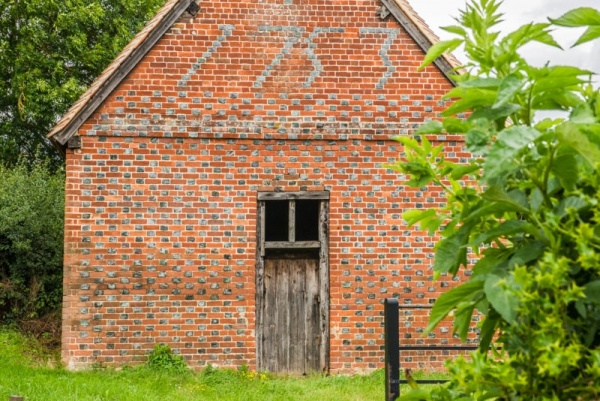 Just outside the pretty Hertfordshire village of Aldbury stands a mid-18th-century dovecote built for nearby Stocks Farm, home of the Duncombe family since 1503. The attractive brick building (also known as the Ashridge Dovecote) was part of the Stocks estate and was built in 1753.

The builder was Arnold Duncombe, who inherited the Stocks Farm estate when his father John died in 1746. Arnold must have gained a taste for architecture, for shortly after finishing the elegant little dovecote he completely rebuilt the family home as a new and fashionable mansion in 1773.

The dovecote is rectangular, measuring 3.88 x 5.68 metres (12.7 x 18.6 feet). The walls are made of brick set on a low stone plinth. One curiosity is that the southern corner (facing Stocks Road) is made with bull-nosed bricks. The National Trust speculates that this may be to avoid damage caused by passing vehicles and horses.

The roof is topped with clay tiles with a weatherboarded turret on top. The turret is modern but probably based on the original 1753 design. 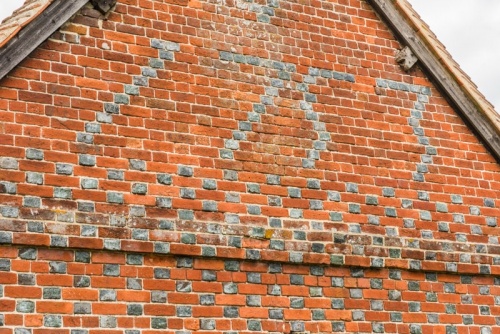 There is one door opening in the south wall, with two window lights above it. There is also a small window on the east wall.

The south facade is highly decorated with a chequerboard pattern of vitrified headers (overburnt bricks). At the top, under the gable, is a diamond shape and a cross, while below is the date '1753', all in grey-coloured vitrified brick. The Hertfordshire Gardens Trust describes the vitrified bricks as blue, though I think that description is a bit optimistic in terms of colour.

This south facade is the only wall to be decorated, presumably because it faced the farmhouse some 200m away. It was obviously intended to make an impression on passers-by and reflect the Duncombe's status and wealth.

The floor is made of packed earth, and the walls are lined with brick-framed nesting boxes. There were originally 482 nesting holes, divided in two by an alighting ledge, making space for 964 nesting pigeons.

Only the nesting holes on the north and west remain. The roof timbers have been renewed, though the original 18th-century purlins and a pair of support collars remain to support the turret. 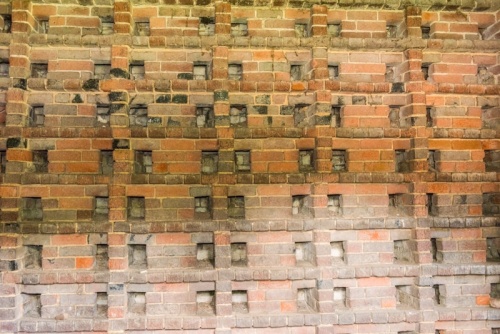 Nesting boxes in the dovecote interior

The dovecote was given to the National Trust's Ashridge Estate in 1990 by Joan Cole, whose husband Richard was a land agent for the Estate for 35 years. The Estate originally had its own dovecote, built in the 19th century to raise pigeons and eggs for lavish dinners at Ashridge House. That dovecote is now part of Gade House in Little Gaddesdon and may have been designed by the prominent Regency architect Jeffry Wyattville.

The Dovecote is only open occasionally. The last time we checked this was once a year in late summer. Please check with the Ashridge Estate for opening plans.

However, you can still see both the exterior and interior even if the Dovecote isn't officially open. That's because the two-light opening over the south doorway allows a clear view into the interior and an excellent look at the nesting boxes.

Don't let all those words of caution put you off; we thoroughly enjoyed our stroll to the Dovecote and the chance to photograph the interesting decorative brickwork and see inside the building. 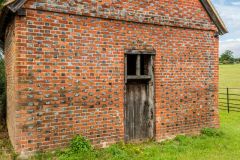 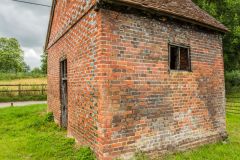 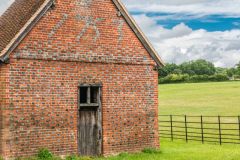 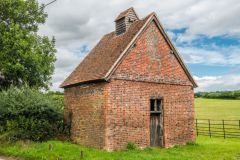