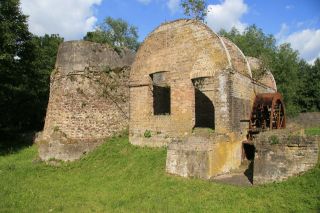 Royal Gunpowder Mills
A historic gunpowder mill set in beautiful parkland. The Royal Gunpowder Mills date to at least the 17th century, and possibly earlier. We do not know when the first mills in the area started producing gunpowder, but we do know that in 1662 a local curate boasted that mills in his area had blown up five times in the last seven years (thankfully with no loss of life).

In 1665 an Oyle Mill at Waltham Abbey was converted to gunpowder production, and thus began a journey of centuries that would result in Waltham Abbey being the most successful producer of gunpowder in Britain. In 1789 the mills were taken over by the Crown and became the Royal Gunpowder Factory.

In 1809 the royal mill earned a reputation as the producer of the finest gunpowder in the land. In a special competition on Marlborough Downs gunpowder from six leading mills was used to fire a cannon, and the cannonball using Waltham Abbey's powder went furthest.

The mill is not one building but a huge complex of buildings. Within the grounds of the current site are no less than 21 historic, listed, buildings to view. These include a Cordite Drying Stove, mixing house, saltpetre melting house, offices, incorporating mills (where the constituents of gunpowder were mixed, or 'incorporated', a set of steam-driven 19th-century mill buildings in Italianate style, and magazines for storage of explosives. In addition, you can view a Victorian 'press house', where gunpowder was compressed.

Within the mill complex is a nature reserve, with over five miles of waterways, featuring walking trails and picnic areas for visitors. There is a narrow-gauge railway across the site, which has been declared a Site of Special Scientific Interest in recognition of the role it plays in providing a habitat for animals and birds. Indeed, the Mill boasts the largest heronry in Essex.

There is a huge variety of historic interest at the Royal mills; the whole history of gunpowder manufacture is explained in a compelling way.