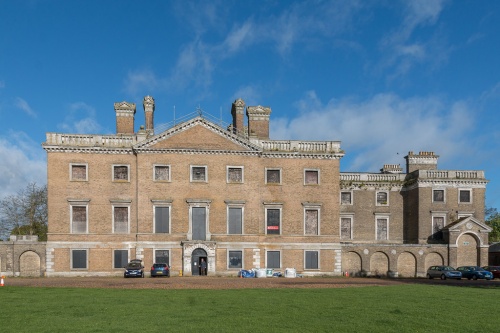 Copped Hall is a historic Georgian mansion with a history that goes back to at least the 13th century.

The early history of Copped Hall is a bit of a mystery. We know there was a substantial building on the site as early as the 12th century when the estate was in the possession of the Fitzaucher family, who served as royal huntsmen In 1337 Sir John Shardlow bought Copped Hall, but Shardlow did not keep the estate, choosing rather to grant it to the Abbots of Waltham in exchange for estates elsewhere. Under the Abbots of Waltham, the estate was enlarged to around 300 acres.

The estate remained in the possession of Waltham Abbey until the English Reformation. In a desperate attempt to save the abbey from being dissolved the abbot gave Copped Hall to Henry VIII. Henry, predictably, accepted the gift but proceeded to dissolve the abbey regardless. From 1538 Mary Tudor, eldest daughter of Henry, lived at Copped Hall, a virtual prisoner.

After Mary ascended the throne in 1553 the estate passed from one tenant to another until Elizabeth I granted it to Sir Thomas Heneage. Heneage almost immediately began to rebuild the old hall, incorporating part of the older building in his grand new mansion.

Heneage's mansion house was complete in time to receive a state visit from Elizabeth in 1568. Unlike many Elizabethan buildings, Heneage's Hall was built to a U-shaped plan, only partly enclosing a courtyard.

This mansion had two floors, with single-storey corridors connecting the main block to the wings of the U. The entire top floor of the east wing was occupied by a long gallery, stretching 174 feet in length. The gallery looked onto a two-storey chapel, and to the south of the main mansion block was a formal garden area.

Shakespeare's play 'A Midsummer's Night Dream' was first performed at Copped Hall, as part of the celebrations for the marriage of Heneage to the Countess of Southampton in 1594. After Heneage's death, the house eventually passed to another powerful court figure, Lionel Cranfield, the 1st Earl of Middlesex, Lord High Chancellor of England. Cranfield fell from royal favour and lived out his days at Copped Hall, extending and enhancing the gardens.

From the Cranfields the estate passed to the Sackvilles, Earls of Dorset, and in 1701 to Sir Thomas Webster. Webster, however, spent little time at Copped Hall, preferring his other estates, and the house fell into disrepair. The estate was purchased by Edward Conyers in 1739. 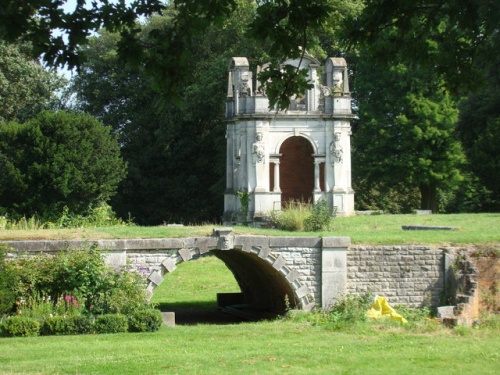 John Conyers, Edward's son, became caught up in the Palladian ideals sweeping English society in the mid-18th century and tore down the mansion entirely in 1748 to make way for a new neo-classical house. Plans were drawn up by a trio of architects, and the new house was built on a different site.

This was finished in 1758 in a much more simplified form than many of the early proposals, which featured a portico together with a central rotunda and dome. In addition to the new mansion, a four-acre walled garden was added.

In 1775 John Conyers son, also named John, called in Sir James Wyatt, one of the leading architects of late 18th century Britain, to redesign the interiors. Wyatt's main contributions were the entrance screen and southern gatehouses.

The house remained largely unaltered until it was sold to a wealthy industrialist named George Wythes in 1869. Wythes' son George added a north wing, on a scale commensurate with his family's wealth and influence. However, when Ernest Wythes inherited the estate he proceeded to spend that fortune in record time. He enlarged the north wing, rebuilt the stables, built a stone conservatory, remodelled the interior, and stocked it with a wealth of art and furniture.

He also had an Italianate architectural garden built, full of statues, temples, gates, and elaborate fountains. The elegant lifestyle to which Wythes aspired can be judged by the fact that in 1900 he employed 27 house servants and 31 gardeners - despited the fact that the Wythe family only stayed at Copped Hall for a part of the year.

One terrible Sunday morning in 1917 the central block of Copped Hall was destroyed by fire. Some of the contents were salvaged, but the family were forced to move to a smaller house on the estate as a temporary measure.

Like so many temporary measures, this one became permanent. Ernest Wythes never rebuilt the mansion, and it was left to decay. The gardens were kept up, and much of the staff were kept on, but the estate never recovered from the combined effects of the fire and the social changes wrought by the First World War.

For the great days of the country house were over, and the grand lifestyle to which Wythe was accustomed became a thing of the past.

After Ernest Wythe died in 1949 the mansion was stripped of anything valuable and the estate was sold. Even the stone conservatory was destroyed by dynamite. The new London orbital, the M25, was routed through the Copped Hall estate and it seemed that the fate of the mansion was sealed.

However, though the interior of the Hall was in dire condition, the exterior was intact. The proximity of the mansion and the estate to the motorway meant, however, that Copped Hall was a constant target for ambitious developers.

In 1992 the Corporation of London stepped in and purchased the estate, and three years later the mansion and surrounding gardens were bought by a charitable trust formed to preserve and restore them.

When the Copped Hall Trust purchased the building it was in a desperate state of disrepair. Over the intervening years, a great deal of work has gone into carefully restoring the mansion, gardens, and ancillary buildings.

The fire of 1917 left the structure of the mansion in a very poor state, but bit by bit chimneys have been stabilised, floors reinstated, and walls repaired, to the point that special group tours can be offered and the general public admitted on a limited basis to view parts of the interior.

Ancillary garden buildings like the stables have been restored to the point where they can be opened to the public, and large areas of the gardens have been reinstated, with the aid of 10-20 volunteers.

Over the past decade, the CHTAP has been investigating the site of the Tudor 'Old' Copped Hall, the predecessor of the current Hall. These ongoing yearly digs have revealed the cellar walls, enabling experts to determine the different phases of development of the Hall over the 16th and 17th centuries. Another trench has revealed a curious freestanding round structure in the lower great lawn.

Archaeological finds indicate that the site was in use since at least the 13th century, and sherds of Roman and Iron Age pottery shows human presence at Copped Hall much earlier than that! Volunteer archaeologists can undergo a short training course to enable them to take part in the main annual dig.

The Hall is gradually being restored by the Trust, with most of the cellars, ground floor, and first floor now accessible. The Trust holds regular open days as well as many other educational and cultural events which have to be booked in advance. Details of open days can be found on the Trust's website, with news on the state of archaeological and restoration efforts.

More self catering near Copped Hall