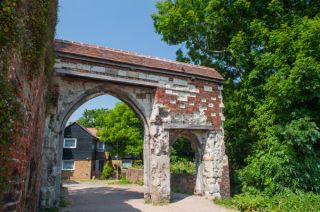 A late 14th-century gatehouse and a nearby medieval bridge are all that remain of the great abbey founded by the Saxon King Harold. The gateway was built in 1369 and formed the main entrance to the abbey precinct.

The builders used a mix of stone and bricks and made a large central gateway for horses and carts, and a smaller doorway for pedestrians. The gateway was topped with turrets on both sides and might have had an upper storey, but no trace of this now remains. Immediately to the south of the gateway is a wall made with medieval Essex bricks, made locally, and among the best examples of early medieval bricks in England.

As far as we could determine the bridge is not signposted - it would have been a lot easier to find if it was! From the gatehouse follow the path beside Cornmill Stream until you come to a small bridge on your left. Go through into the next field and you can see an iron railing away to your right. Cross the field to the railing and you will be able to see the bridge quite easily. There are no information plaques on this side of the stream to tell you about the bridge, which is a real shame.

Though English Heritage preserves the gateway and bridge - and only mentions these properties on their website - there is actually quite a bit more of the abbey preserved. The outline of the cloisters is easy to make out, as is the night stair used by monks to go from their dormitory to the abbey church.

A vaulted passage linking the cloisters with the stair survives, as does a range of high walls that formed part of Abbey House, a mansion built by Sir Edward Denny after Waltham Abbey was dissolved by Henry VIII in 1540 - the last monastic house to be surrendered to the Crown. Alas, the mansion is no more; it was torn down in 1770. Carved panelling from Abbey House is preserved in the Epping Forst District Museum, a short stroll away on Sun Street.

The Abbey gatehouse and bridge are open to access at any time. I can highly recommend a visit to the church, but even if the church is closed you can still see the reputed site of King Harold's grave, marked by a low plinth and a block of stone beyond the east end of the church. The best place to park is in the free Abbey Gardens parking area off the B194 (Crooked Mile Roundabout). 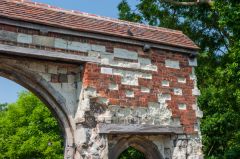 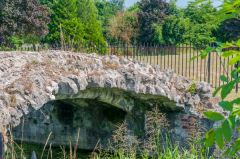 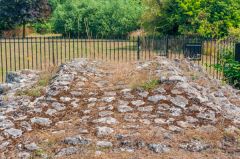 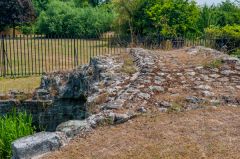 More self catering near Waltham Abbey Gatehouse and Bridge >>

More bed and breakfasts near Waltham Abbey Gatehouse and Bridge >>