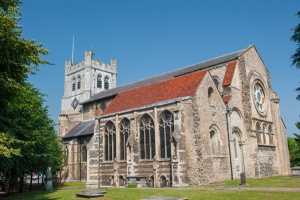 The roots of Waltham Abbey's historic church go back deep into the Saxon period, to the year 610AD, when King Sabert of the East Saxons founded a minster in the centre of his royal hunting park of Waltham. Sabert's people reverted to paganism after his death in 617AD, but when Offa of Mercia took control of the area in the late 8th century he built a stone church around the earlier timber structure.

In the early 11th century King Cnut gave Waltham to Tofig, one of his most powerful nobles. Tofig owned estates in Somerset as well as Essex, and on one of those southern estates he found a large stone crucifix, buried on the top of a hill. This crucifix was brought to Waltham. where it became a destination for pilgrims. The church became known as Holy Cross after the crucifix.

In the 1050s Waltham was granted by King Edward the Confessor to Harold Godwinson, son of the Earl of Essex, and the king's brother-in-law. Harold was said to have been healed of an affliction by praying before the holy cross, and as a result, he decided to rebuild the existing church and made it clear that he wished to buried here. He also set up a college of 16 lay canons to administer his new church. 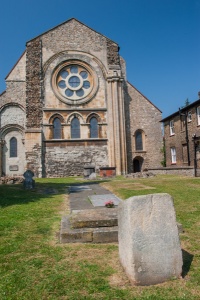 When Edward died Harold took the throne as King Harold I, but his brief reign ended with defeat to William the Conqueror at the Battle of Hastings in 1066. On his way to meet William's Normans at Hastings, Harold stopped at Waltham to pray for victory.

According to legend, after the battle, Harold's body was carried to Waltham as he had wished, and there buried before the altar of the church he had built. His grave was supposedly moved several times over the centuries as the church was extended.

Unfortunately for legend, there is no proof that Harold was ever actually transported from Hastings to Waltham, and it seems just as likely that he was unceremoniously buried with his fallen warriors at Hastings.

Let's not let history get in the way of a good story; there is a memorial to Harold on the presumed site of his grave, before the high altar of the Saxon church. A few steps from the memorial is an area of herringbone stonework in the east wall of the church. This would certainly have been part of Harold's late Saxon work. 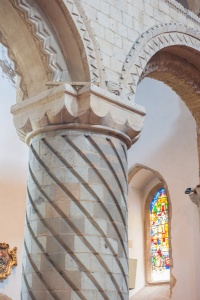 Only fragments of Harold's church remain, for around 1080 a new Norman church was begun. The earliest part of this structure is the current apsidal east ambulatory. In the 12th century, a new nave was built, supported on wonderful Romanesque pillars carved with grooves and chevrons. Above the nave pillars are wide, ornamented galleries and a clerestory.

The effect of the 12th-century architecture is stunning, and you might find yourself uttering an involuntary gasp when you first enter the nave. On one of the southern pillars are marks where chains were anchored in the stone, to secure valuable books.

We are even fairly certain which books were chained to the pillar; records show that the Great Bible and the Paraphrase of Erasmus were secured here. Later additions were Bishop Jewel's Apology, and Foxe's Book of Martyrs, which was written in the parish.

In 1177 the college of lay canons established by Earl Harold was replaced by Augustinian canons and Waltham became a full-fledged priory. The impetus for the change came from Henry II, who established the priory as part of his reparation for the murder of Thomas Becket at Canterbury. 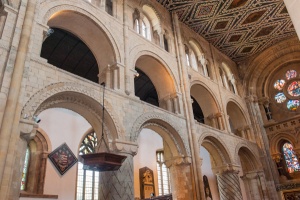 In 1184 Waltham became a 'mitred abbey'; that is, the abbot was allowed to wear a mitre, like a bishop. The abbot had a seat on the King's Council and was later granted a seat in the House of Lords. The abbot was exempt from allegiance to a bishop and reported directly to the king, so it is clear that Waltham Abbey held a very prestigious place in medieval England's hierarchy of church and state. 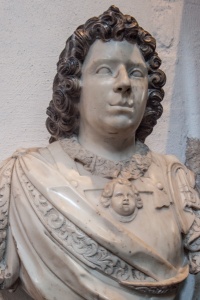 The older Norman church was retained as the parish church, and it is this grand building we see today, set in a landscape of monastic ruins, including remains of a vaulted passage, the monk's night stairs, medieval gatehouse, and bridge.

Part of the ruins was converted into a Tudor house, but this, in turn, was pulled down. The outline of the earlier Saxon church is visible on the grass outside the east end of the current church, and the site of the Saxon altar, with a memorial to King Harold, now stands in the open air within the medieval abbey grounds.

This small window in the south aisle was designed by Henry Holiday, a Pre-Raphaelite artist who worked with Edward Burne-Jones. In 1861 Holliday was commissioned by William Burges to create stained glass to fill an empty window space. Money for the window was donated by the children of the parish, so it is known as The Children's Window. 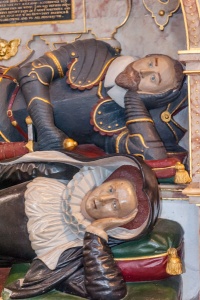 In the north chapel is a table tomb to Robert Smith, a sea captain who died in 1637. His tomb is decorated with intricate carvings of ships, cannon, and other maritime symbols. Nearby is an intriguing memorial in the form of a bust to William Wollaston, who died of smallpox in 1684, at the age of 16. But these tombs pale by contrast to a pair of memorials in the south-east corner of the church, by the steps leading to the Lady Chapel.

Against one wall is a brightly painted memorial to Sir Edward Denny (d. 1599) and his wife. Denny fought against the Spanish Armada, sailed with Sir Humphrey Gilbert on the voyage to claim Newfoundland for Elizabeth I, and was castellan of Tralee Castle in Ireland.

The Denny tomb is typical of the late Elizabethan period, showing the couple on their sides, heads supported on bent elbows, facing the viewer. The costumes are painted and gilded, and the base of the tomb depicts the couple's 10 children. Near the Denny memorial, against the east wall, is a worn late 16th-century alabaster effigy to Lady Elizabeth Greville, the aunt of Lady Jane Grey (the Nine Days queen). 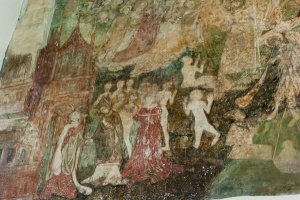 There are several 18th-century grave slabs in the chancel. Look for the slab to Thomas Holmes, whose date of death is shown as 1738/9. This recalls the British adoption of the Gregorian calendar in 1752 when 11 days were skipped to bring the old system of calculating dates in line with Gregorian dates. For many years afterwards, dates were recorded in both new and old versions. The Holmes memorial must have been carved well after the death of Holmes, perhaps by his son or daughter.

The abbey church features glorious Norman architecture in the nave, and the ancient roots of the church and abbey are evident everywhere you look. Do take the time to explore the abbey grounds and restored garden nearby. 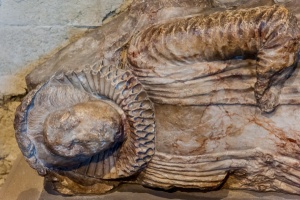 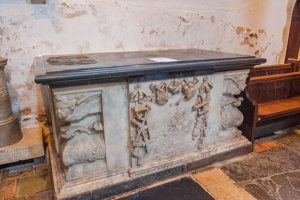 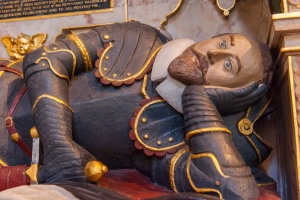 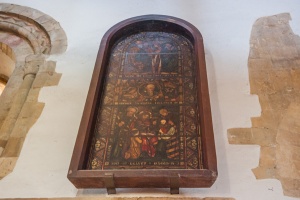 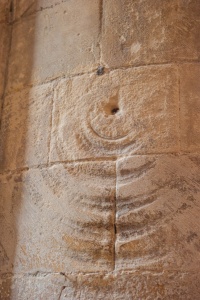 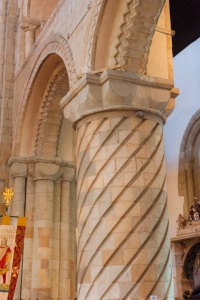 More self catering near Waltham Abbey