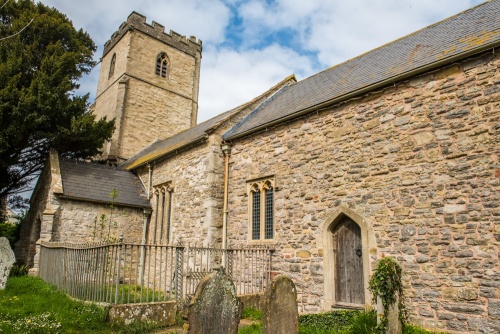 Otterhampton church was originally dedicated to St Peter but was later renamed All Saints. The church stands beside a farmyard, looking out over the estuary of the River Parrett on the minor road to the Steart Marshes nature reserve.

Above the church stands Hill House, once home to the Evered family, lords of Otterhampton manor.

We do not know when the first church was erected here but documents suggest a church as early as the 12th century, a fact that is confirmed by the presence of the Norman tub font, decorated with bands of saltire crosses. All Saints seems to have been a chapel of Stockland Church; burials were carried out at Stockland and the earliest recorded priest at Otterhampton was called 'chaplain' rather than 'rector'.

All Saints is primarily a 14th-century building with the addition of a 15th-century tower in Perpendicular style. In the belfry hang 4 bells, the oldest of which was cast in the 16th century.

The history of the church makes fascinating reading; in 1377 the rector, High Willings, was accused by the vicar of Stockland of avoiding customs duties, and in 1554 the rector was accused of not preaching sermons and keeping his horse in the churchyard. 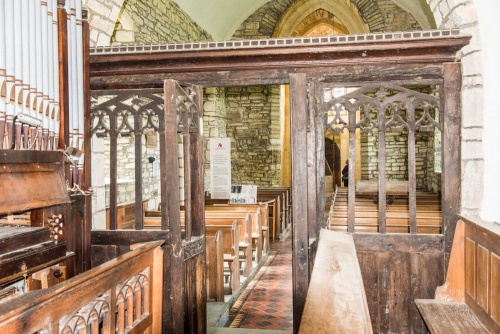 In the early 17th century the church had an absentee rector, Robert Reason, who was chaplain to the Earl of Rutland. Reason appointed a curate who was accused of neglecting his duties and allowing another man to take occasional services. In 1630 the chancel roof was reported as being in such poor condition that it was a danger to people taking communion.

In 1868 a chapel of ease was built at Combwich, and as a result, attendance at All Saints fell. A church report in 1881 recommended closing the medieval building and making the chapel the parish church, but instead, All Saints was restored. It was eventually closed in favour of the chapel, but only in 1988, over a century later.

The church is built of rubble and is laid out on a simple plan with a nave, chancel, north vestry, south porch, and west tower. The oldest part of the building is the nave, which may have been built in the 12th century, though very few traces of that earlier building remain. The south doorway is 14th century and retains fragments of medieval tracery, and the font dates to the 12th century, with a carved Jacobean cover.

The east window was rebuilt in the late Victorian period but retains some 15th-century glass. There are three 14th-century niches on either side of the chancel arch, and there are 17th-century communion rails a royal coat of arms to George VI, and a beautifully carved 16th-century screen.

On the north wall is a painting depicting Christ in the Judgment Hall, given by RG Evered, a 19th-century lord of the manor. On the north chancel wall is a memorial to a son of Revd. CWH Evered, and nearby is another memorial to DR J Jeffery, who served as rector for 67 years and used his own money to establish an annual charity for the poor of the parish. The site of the Evered (Everard) family vault is marked by a reused slab in the chancel floor, carved with a floriated cross. 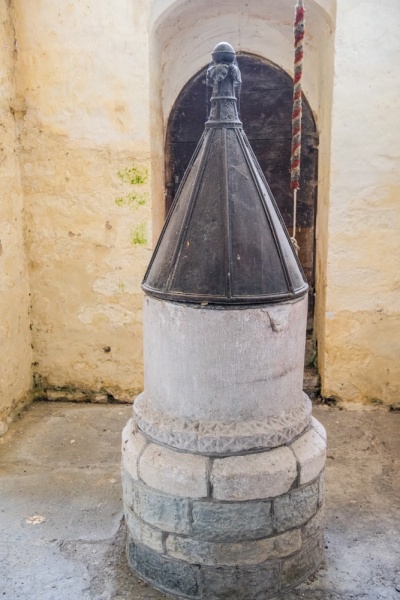 Somewhere in the churchyard is believed to be the burial place of the Elizabethan alchemist Thomas Charnock (1526–1581), who spent the last years of his life searching fruitlessly for the elixir of life. Charnock was a native of the Isle of Thanet in Kent, but he spent most of his life in Combwich.

His uncle had been Henry VIII's confessor as well as pursuing an interest in alchemy. Thomas inherited his uncle's texts on alchemy and this led him to pursue his lifelong search for the Philosopher's Stone. His neighbours regarded him with suspicion and fear, and he was forced to barricade himself in his cottage.

When he died no one was brave enough to live in the cottage. Given their attitudes, it is somewhat surprising that he was buried in the consecrated ground of Otterhampton churchyard.

All Saints was made redundant in 1988 and passed into the care of the Churches Conservation Trust. It is usually open daylight hours. The church is on a lane heading west off the minor road leading to the Steart Marshes nature reserve north of Cannington. 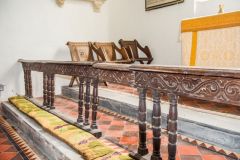 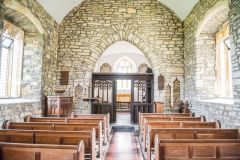 More self catering near Otterhampton, All Saints Church >>

More bed and breakfasts near Otterhampton, All Saints Church >>