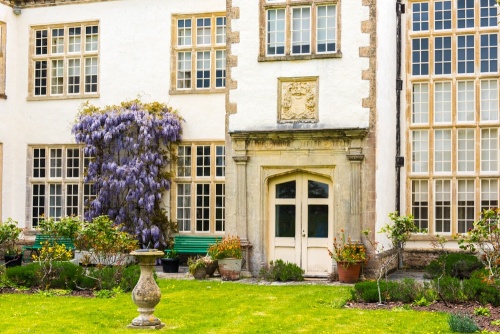 Fairfield is a medieval manor house and the family home of the Acland-Hood family for over eight centuries. The first manor house was built as early as 1166. The house has passed numerous times through the female line, so the family name of the owners has changed from Russell to Vernai (Verney), Palmer, Acland, and finally, Acland-Hood.

There are hints at an even older dwelling; to the east of the house is the site of a long-vanished village of Fairfield, where a family ancestor named Martin had a dwelling. Even today there is a field known as Martinsland.

The origins of Fairfield house are hazy, but records show that a chapel was built in 1288 with an endowment for a chaplain.

William de Vernai fought for Edward I in his Scottish wars and died of his battlefield wounds in 1300. William enhanced the family fortunes by marrying Margaret Russell in 1264. Their great-grandson John fought with the Black Prince in France. He seems to have had a French mistress, for before he returned to England after 10 years in France he made a settlement for his 'faithful and well-beloved companion' and their two children in Bordeaux. When he returned to England John settled at Fairfield.

Many family members are buried in Stogursey Church, with the oldest tomb being that of Wiliam de Vernai (d. 1333). 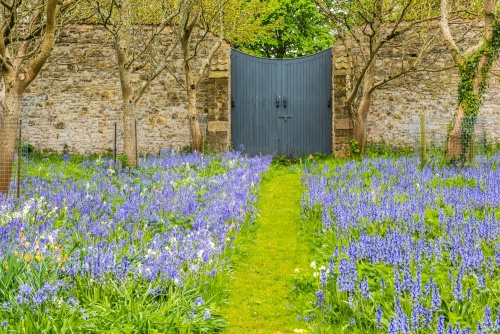 The walled garden in spring

His son, also named John, seems to have had a troubled relationship with the Stogursey Priory, for he was reprimanded by the Archbishop of Canterbury in 1442 for shouting at the prior in English during a service at Stogursey Church. Despite the contretemps, John later retired to the priory to live out his last days.

In 1472 William Verney was granted a license to fortify the manor, enclosing it within a stone wall with seven guard towers. He was also given permission to enclose land for a deer park. The foundations of several towers were discovered during excavations in 2009.

Robert Verney enhanced the medieval house with a gatehouse, a chapel, and a buttery. Robert was a staunch Catholic, and refused to acknowledge Henry VIII as head of the Church of England. His defiance cost the family dearly, for he was fined and sent to prison, and the house was allowed to decay.

The family reingratiated themselves with the royal family and in 1557 Elizabeth I agreed to act as godmother to Robert's great-granddaughter, named Elizabeth in honour of the queen. Unfortunately baby Elizabeth's mother died in childbirth and the infant inherited Fairfield when she was just a few days old. At just 14 years old Elizabeth married Sir Thomas Palmer, the son of her guardian, and together the Palmer and Verney families were able to rebuild the house in 1589, and it is this date which appears on the datestone above the porch.

Elizabeth Verney's son Thomas sailed with Sir Francis Drake and commanded a ship during Drake's daring raid on Cadiz. Their grandson Colonel Peregrine Palmer fought for King Charles I in the Civil War and had to go into exile in Flanders when the Royalist cause was lost. His daughter Elizabeth married into the Wroth family of Petherton Park and Fairfield passed to their Acland descendants. 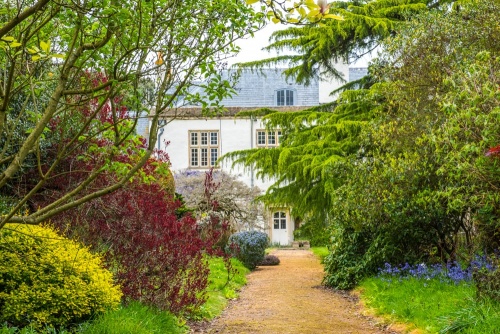 Fairfield House from the gardens

In 1762 Arthur Acland inherited Fairfield. His son Sir John Palmer Acland added the parapet that you can see around the roofline and transformed the house interiors into a fashionable Georgian residence. He added a kitchen block and had the road moved further from the house, which required an Act of Parliament.

Under his influence, the winding drive was built and a ha-ha installed near the house to open up the views to include a landscaped parkland with carefully arranged clumps of trees added in the style of Capability Brown.

The house itself is built to a traditional Elizabethan E-plan, with lime rendering over rubble, dressed by Bath stone. The oldest part of the building is the west wing, dating to the medieval period and retaining its 15th-century roof. The remainder is Elizabethan except for a section of the rear which dates to the 18th century. Near the house stands a barn and granary, stable block, and dovecote, all Grade-II listed.

The house stands beside a 15th-century deer park. Closer at hand is an 18th century walled garden which gives way to an 18th-century landscape garden.

Fairfield is only accessible by guided tour, and the house has limited opening hours. Though it is a member of the Historic Houses Association, HHA Members still have to pay full admission prices, with admission fees going to maintain the parish church. Our family visited on a grey, overcast day in spring.

We were due to have a tour led by the owner, but she was delayed so we for the first part of the tour we were led around the house by a volunteer guide, then the owner took us around the second part of the house. After that, we were free to explore the grounds, including the very attractive gardens.

Fairfield is a lovely historic building with a very relaxed and welcoming atmosphere. When we visited there was a large jigsaw puzzle laid out on a table and we were invited to pitch in and try to help put it together before the start of our tour. That's the sort of friendly, relaxed touch we experienced throughout the whole visit.

Fairfield appears to no longer be a member of the HHA, and it isn't clear whether guided tours are still available. We'll update this page as soon as we know more. 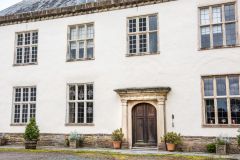 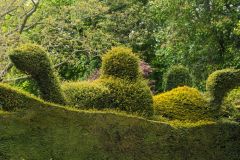 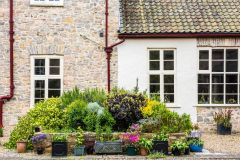 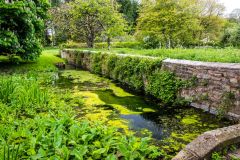 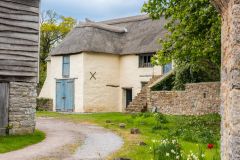 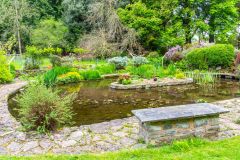 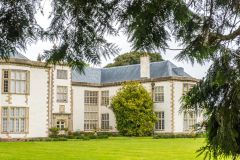 More self catering near Fairfield >>

More bed and breakfasts near Fairfield >>

Located in an idyllic countryside setting this property enjoys peace and tranquillity just a stone s throw from the bustling town of Bridgwater. Take to the nearby Quantock Hills and …
Sleeps 8 This well-presented attached cottage rests in the hamlet of Huntworth, near Bridgwater in Somerset.
Sleeps 6