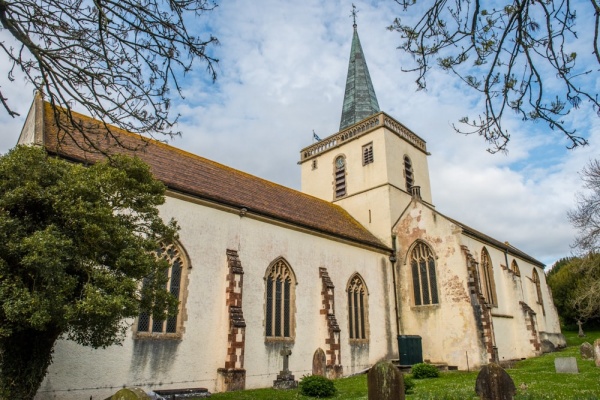 Stogursey is a picturesque village on the fringe of the Quantock Hills, between the hills and the coast. The village really began to develop after the Norman Conquest, and several decades after the coming of the Normans the church of St Andrew was built. It was certainly in existence before 1100.

In the first few years of the 12th century, the church was given by William de Falaise and his wife Geva to the Priory at Lonlay in Normandy, close to the village of Falaise where William's ancestors had lived. The Norman priory sent monks to Somerset and by 1120 a small monastic community had been established and a daughter priory built. The priory shared use of the church with villagers.

Nothing remains today of Stoke Courci Priory beyond a thatched dovecote on the hill above the churchyard.

Around 1175 the monks extended the church to its current dimensions. One remnant of this extension is the chancel arch, a beautiful example of Norman architecture. Indeed, Stogursey church probably possesses the finest Norman architecture in Somerset.

Stoke Courci Priory suffered at the hands of Henry V, who in 1414 seized all 'alien priories' (monasteries populated by foreign monks and that sent their profits to overseas mother houses). In 1440 Henry VI gave the priory revenues to endow his new foundation of Eton College and the Provost and Fellows of Eton still hold the living. 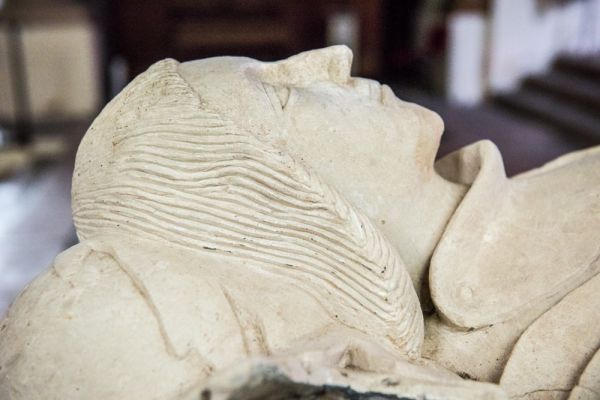 The church is composed of a nave, chancel, crossing tower and transepts, with only the crossing remaining of the original 12th-century church. The central tower is topped by a wooden spire and decorated with a parapet added in a Victorian restoration in 1864.

You enter the church through an original Norman doorway. The nave has a Victorian roof but retains some very good 16th-century carved angels in the corners. Also 16th-century work are the carved bench ends. The bench carvings include fantastic creatures, foliage, geometric designs, and a Pelican in Piety. Look for a carving of a spoonbill with an eel in its beak, and another of a man in a loincloth. The bench ends may have been the work of a carver called Glosse, who, according to church records, was paid for work on the church in 1524.

The pulpit is made from fragments of a Jacobean reading desk and is incorporated into the medieval rood stairs. Near the pulpit is a recess that may have contained effigies of the Verney family that are now under the choir arcades.

The south aisle served as the Verney family chapel, and holds memorials to generations of the family and later lords of the manor. The oldest and most interesting tomb is that of William de Verney (d 1333). Nearby is the tomb of William's grandson John de Verney (d 1447). There was apparently a third Verney effigy in the 18th century, said to be that of Ralph Verney, but no trace of that monument has survived.

John de Verney had a turbulent relationship with the Prior of Stoke Courci; in 1442 he was ordered to appear before the Archbishop of Canterbury on the charge that he had interrupted the prior's service, and himself preached to the parishioners in English, telling them to disobey the prior. Not surprisingly, the Archbishop came down on the side of the prior and censured Verney. He must have made his peace with the prior or he would not have been allowed to be buried in the church!

Against the east wall of the chapel is a monument to Sir Thomas Wroth of Petherton Park (d 1721) with his daughter Elizabeth (d 1737) and her husband Thomas Palmer (d 1734). Palmer gave the church a pair of dishes, two flagons, a chalice, and a paten in 1723 to celebrate his marriage to Elizabeth. 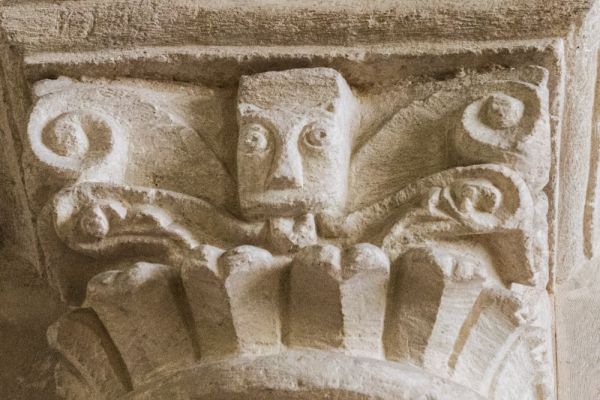 The chapel holds memorials to the owners of nearby Fairfield. The oldest is the monument to Peregrine Palmer (d 1684) in the style of, if not actually carved by Grinling Gibbons. Nearby is a memorial to his son, Nathaniel Palmer.

Historical highlights include a pair of Norman fonts. One is original to the church, but the other comes from the redundant church at Lilstock. The original font is a massive tub carved with four peculiar faces above a broad band of ropework moulding. It stands on a section of medieval tiles. The Lilstock font is smaller but has the same style of crude carving.

Near the base of the south-east column of the crossing is an iron ring. This ring has been traditionally identified as a sanctuary ring, a safe refuge for any felon who could grasp the ring before being captured. If true, it is odd to see such a ring inside the church; most are affixed to the church door.

Perhaps the most interesting architectural feature are the crossing capitals, part of the original Norman monastic church. The capitals are magnificently carved in a variety of styles. One features a strange figure that might be a Green Man - though it might also be a cat. Others have a chequerboard design, with grotesque beasts below. The crossing arches are beautifully carved with traditional Norman dog-tooth designs.

St Andrew's is a delightful church, full of historical interest, and is well worth its inclusion in Simon Jenkins popular book England's Thousand Best Churches. 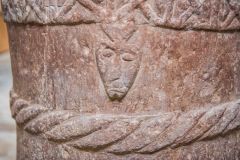 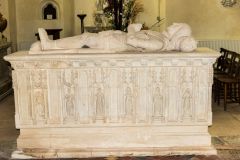 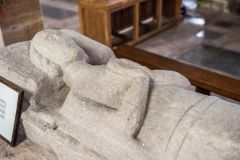 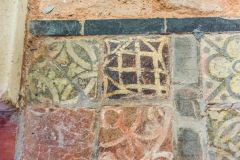