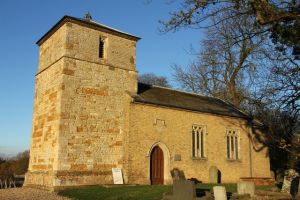 Buslingthorpe, St Michael's Church
A very tidy little country church standing in trees, close to a moated medieval manor site just north-east of Snarford. The nave and chancel of St Michael's were renovated in the Victorian period, but, blessedly, the renovations did not disturb the medieval treasures within.

Inside the church is one of the very earliest examples of a military memorial brass in England, that of Sir Richard Boselyngthorpe. The brass is 'half figure', that is, it shows only the upper torso of Sir Richard, arrayed in mailed armour. The brass is inset on a stone coffin lid, and is very nicely carved, with extremely intricate detail of the costume, showing the type of armour worn by knights in the early 14th century.

NB. As noted, this figure was thought to have been one of the first military brasses in the country. However, recent research into the family history of the Buslingthorpe family suggests that Sir Richard may have died around 1340.

That would probably make him the son of Sir John de Buslingthorpe, whose stone effigy lies close by. Irrespective, the brass is still a quite lovely historic memorial. Also nearby is a further carved stone slab to an unknown priest.

The Boselyngthorpe (Buslingthorpe) family held the manor here for over 300 years, from about 1170 to the 15th century. The manor has vanished, but traces of the moat can be seen near the churchyard. The church is no longer used for regular worship and is in the care of the Churches Conservation Trust. It is generally open to visitors.