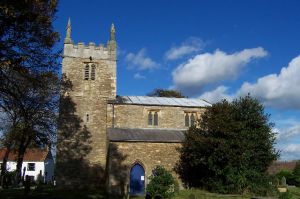 Normanby-by-Spital Church
St Peter and St Paul's church at Normanby is a Norman building, entered through a door in the base of the west tower. The building is composed of a nave with clerestory, chancel, south aisle, south porch, and an embattled west tower.

The church stands near the course of the old Roman Road known as Ermine Street. The interior boasts a very fine 12th-century arcade separating the nave and south aisle, with good carving on the arcade columns.

The interior is primarily 12th to 15th century, with 18th-century benefaction boards. The term 'spital' in the village name is a reference to the medieval Hospital that used to stand nearby.

More self catering near Normanby-by-Spital Church >>