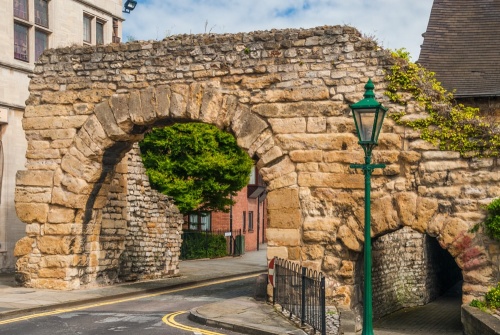 Newport Arch is the most famous Roman remain in Lincoln, and the best preserved. The gateway straddles Bailgate, at the northern extremity of the old Roman city, where the old Roman Ermine Street struck north towards York.

The Newport Arch dates to the start of the 2nd century AD. It gave access from the city to Ermine Street, the main Roman road north to York. It is famous as the only Roman arch in Britain still in use for daily transportation.

In the fourth century, the city walls were strengthened, and at that time Newport probably consisted of a central arch for traffic, flanked by two smaller pedestrian arches. An upper floor topped the archway, and the whole structure was flanked by twin towers. 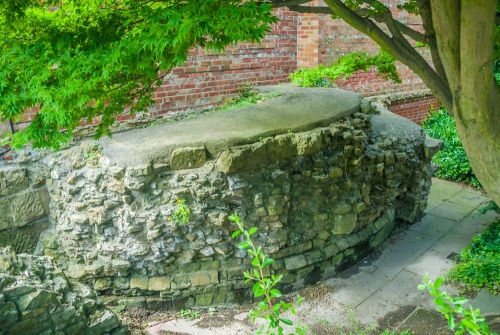 The whole structure would have risen to a height of 26 feet above ground level. The arch as we see it today is merely the upper section of the inner arch; the outer section was destroyed in the 17th century. There is no record of any attack upon the arch or the city walls during Roman times, though the gates here were attacked in the 13th century, during the Battle of Lincoln Fair.

It is rather remarkable that the archway still stands, for in 1964 a tall lorry tried to pass under the central arch and became stuck, dislodging bits of the archway which had stood for 1800 years or more. The considerable damage caused by the lorry was repaired, and the arch still straddles Bailgate. A few steps away you can view a section of the old Roman city wall.

More self catering near Newport Arch