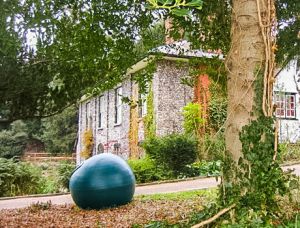 Wycombe Museum
Wycombe Museum is best known for its collection of Windsor chairs. In addition, there are exhibits on life in the Wycombe area and the furniture industry that once flourished here. The museum is housed in an attractive 18th-century manor set in wide lawns.

The museum began as the Wycombe Local History and Chair Museum, which is a pretty accurate reflection of the museum's major focus. The setting is Castle Hill House on Priory Avenue in the heart of High Wycombe. The house was begun in the late 16th or early 17th century and substantially remodelled around 1778.

In the grounds of Castle Hill House is the mound that gave the house its name. The mound is roughly 128 feet diameter, now partially destroyed so that it describes a crescent shape. It is 35 feet high and rises to a conical summit roughly 17 feet across.

The mound is thought to be all that remains of a Norman motte, Robert de Vipont, who held the Manor of Temple Wycombe in the reign of King John. An alternative explanation is that the mound was built as a fashionable prospect mound, like a garden viewing platform.

The museum covers the social history of Wycombe and Buckinghamshire. One of the major themes is the furniture industry, which formed such an important part of the area's history. See Windsor chairs dating to the 18th century, as well as other pieces of furniture, tools, and videos of craftsmen at work. Samples of furniture include 18th-century cane and rush seated chairs.

Other exhibits include old photographs of the town and furniture making, plus a huge archive of documentary material relating to furniture companies, include sales catalogues and design books.

See local art, including historic brass rubbings, engravings, drawings, prints, paintings, and sculptures. The social history exhibit traces daily life in the Wycombe area from Norman times to the 1st century. See pots and pans, clothing, tokens and coins, and a large collection of civic paraphernalia. Of course, there is more to Wycombe's industry than chairs; see lace and lacemaking equipment, straw plaiting and displays on making paper.

One special exhibit of interest to sports fans is the display on the history of Wolverhampton Wanderers Football Club. See club memorabilia including the Lucky Wycombe Comanche, a 5 ft wooden statue of a native American, thought to be a good luck charm by club followers.

The house is surrounded by Victorian gardens, which include a nature trail.

More self catering near Wycombe Museum >>