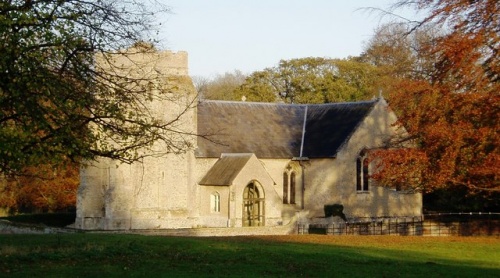 St Nicholas Church, Landwade
St Nicholas church was built by Walter Cotton as a private chapel for Landwade Hall around 1445. Despite some rather unappealing cement repair work, the essential structure has remained unaltered since the 15th century.

The church is built of partially rendered flint and is composed of an aisleless nave, chancel, north and south transeptal chapels, a south porch, and an unassuming two-stage west tower.

There is no real division between the nave and chancel save for a lovely traceried 15th-century screen. There are 12 panels of 15th-century glass reset in the nave windows. The original timber roof is still in place, with carved corbel head decoration.

The main interest at Landwade is not in the structure, but in the wealth of historic memorials to members of the Cotton family. These span almost 300 years from the 15th to the early 18th centuries. There are several table tombs of unknown Cottons in the chancel.

In the north chapel is an extremely grand six-poster monument to Sir John Cotton (d. 1593), with the decorative strapwork so common in that period. There are more Cotton memorials in the south transept, most of them to subsequent 'Sir Johns'. In the chancel is a memorial brass to William Cotton (despite appearances to the contrary it seems that Cotton parents did know other names than 'John').

Taken as a group, the Cotton memorials are among the finest in Suffolk, and well deserve a visit. It is fascinating to trace the evolving styles from the earliest 15th-century memorials to the classical fashion of the later tombs.