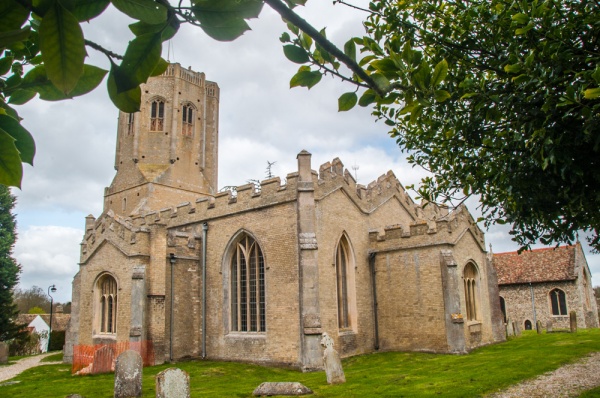 SS Cyriac and Julitta, Swaffham Prior
There are two historic churches in Swaffham Prior, and they share the same churchyard (see Duxford for a similar pair of churches). One was built by the Norman lords of the manor and the other by the Abbey of Ely.

St Cyriac's began as a Norman building but was rebuilt on a huge scale in the 15th century. Only the tower survives from that 15th-century building. It really is a striking sight, with a square base rising to an octagonal lantern decorated with intricate flintwork and a parapet, with a polygonal turret stain in one corner.

Originally, St Cyriac's and St Mary's served different parishes, until the parishes were merged in 1667 and St Mary's became the sole parish church. In 1779 St Mary's was struck by lightning so the congregation moved back to St Cyriac's. The body of the medieval church was pulled down and in 1806 it was rebuilt in Gothic Revival style by Charles Humfrey, or Humphrey, a pupil of James Wyatt.

The interior is bare, allowing the size of the space and the slenderness of the columns to really shine through. You enter through the west door, under a small west gallery, into an almost square space lit by a large expanse of glass, with slender pier clusters marking the transition from nave to aisles. The empty space has amazing acoustics.

After all the trouble of rebuilding St Cyriac's, the united parish then rebuilt St Mary's, and moved back into it in 1902, leaving St Cyriac's to moulder away and decay. And so it might have done if it had not been rescued by the Churches Conservation Trust.

NB. The unusual dedication of the church is explained by the fact that it was founded by a group of French knights, and the saints Julitta, and her son Cyriac, were much more popular in France than in England. Cyriac was the three-year-old son of a Christian woman named Julitta. The pair were killed by the governor of Tarsus at the time of the Diocletian persecution of Christians in the early 4th century. Cyriac is known in France as St Cyr.

As mentioned above, the church is redundant and is cared for by the Churches Conservation Trust. It is normally open daily to visitors and was open when we visited. There is parking along the road or at a grassed area behind the church.

More self catering near Swaffham Prior, St Cyriac & St Julitta >>