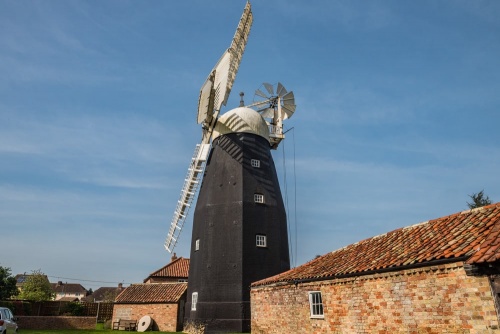 Downfield Windmill (formerly known as Pollard's Mill) is a 19th-century tower mill built upon and incorporating an early 18th-century smock mill, standing on the southern edge of the Cambridgeshire town of Soham.

Downfield Mill was built in 1726 as a brick and timber smock mill. Sometime in the middle of the 19th century the timber smock section was heightened by two storeys. In 1897 the mill was damaged in a storm and the timber top section was rebuilt in brick, turning the smock mill into a brick-built tower mill. Construction was finished in 1890 and the mill was active in this form until 1954 when the fantail collapsed. 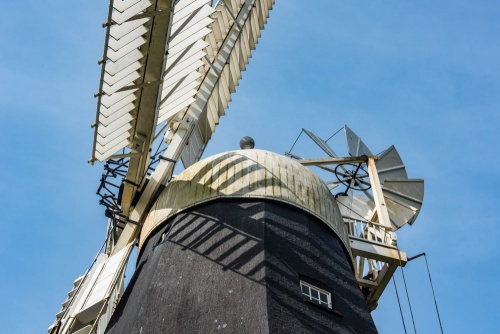 The restored cap and sails

The mill was restored to working order and resumed operation in 1980. It was a working mill until the late 1990s. Once more a programme of refurbishment was undertaken, with help from English Heritage, and the mill now has new sails, stocks, fantail, and internal mechanisms.

The lowest eight feet of the mill base is the oldest part, dating to the original 1729 structure. The upper section is 19th-century work. The mill tapers markedly from its midsection, towards the top. The entire mill is tarred, and with white-painted sails and fantail, the mill stands out like a beacon above the much-lower surrounding houses. Several old millstones lean up against the walls of brick-built service buildings.

Opening arrangements appear to be haphazard. As of this writing, the mill is open for the annual National Mills Weekend and Heritage Open Days. 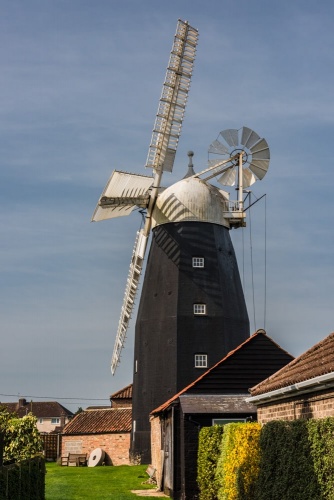 The mill from the east

We ran across Downfield Mill by sheer chance. Though it was shown on our road atlas, it didn't appear in any tourist information for the area, so we were ignorant of its existence. we were on our way to explore nearby Wicken Fen, approaching Soham from the south along the A142 when we saw the mill rising above a cluster of modern houses near the A142/A1123 roundabout at the southern edge of Soham. On a whim, we decided to see what the intriguing tower was all about.

We were encouraged by a small brown tourist sign on Fordham Road, pointing us down Windmill Close. Be aware that the close is short and there is no dedicated parking area. We managed to pull off to one side of the road, leaving enough space for other cars to pass, and got out to take a look. 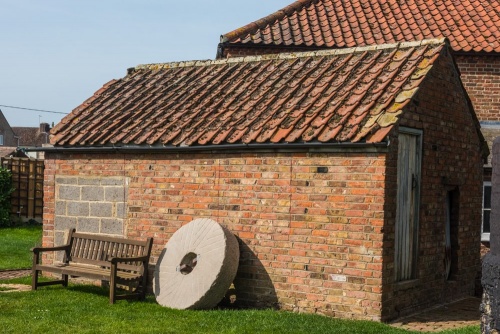 An old millstone leaning against a service building

At the end of Windmill Close is a wooden gate, beyond which a grassy track heads between two houses to a large open space where the mill rises above several small service buildings. There are no signs or information panels. We felt a bit funny entering the windmill enclosure with no one around, but on the other hand, we didn't see any signs telling us to keep out, so we investigated.

We didn't see anyone the whole time we were there, and we walked around the mill and took photographs.

Downfield Mill is at the end of Windmill Close, off Fordham Road, on the southern fringe of Soham, just off the A142. There is very limited parking, so please be courteous and leave room for other vehicles.

More self catering near Downfield Windmill