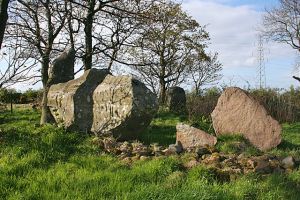 Berrybrae Stone Circle
Berrybrae is a complex site consisting of several distinct phases. There was originally a circle here (actually an oval) consisting of a recumbent stone surrounded by nine standing stones arranged around an earthen bank ranging from 12.8 metres to 1.8 metres diameter.

Sometime around 1700 BCE the cairn was destroyed, and the standing stones - with the exception of the recumbent stone and one flanking stone - were chopped down to create a level site.

A stone wall was then erected over the remainder of the standing stones and the bank to create a cremation cemetery. Within the circle was a ring cairn containing three burials.

About seven miles away is Memsie Cairn burial site.

About Berrybrae Stone Circle
Address: Crimond, Aberdeenshire, Scotland
Attraction Type: Prehistoric Site
Location: On a minor road just south of the A90, west of Crimond. The circle is in a stand of trees at the north-west corner of a minor road junction.
Location map
OS: NK027571
Photo Credit: Anne Burgess, licensed for reuse under the Creative Commons Licence