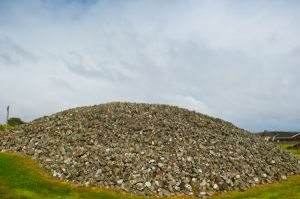 A large stone cairn about 24 meters across, probably dating from Bronze Age. The cairn stands on a minor road on the very eastern edge of Memsie village, easily visible from main road. There are no obvious chambers, just a large heap of round stones, with no kerb stones visible.
I thought at first it was a modern gravel heap, but having said that, its a very impressive mound! It probably dates to 1700 BCE and may have been erected at the same time as two other nearby cairns, since destroyed. Excavations at Memsie unearthed a broken leaf-shaped sword and a beaker pottery vessel.

Though it is tempting to scramble up the mound, please resist the temptation, as to do so would cause damage to the monument. 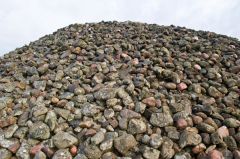 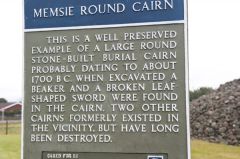 More self catering near Memsie Cairn >>