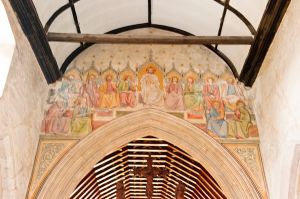 This wonderful Norman church was rebuilt around 1252 in Early English style. It stands beside the site occupied but a Benedictine priory as early as the late Saxon period. The imposing west tower was built with a bequest from the Duke and Duchess of Gloucester in 1440, and their arms appear by the west door.

The interior has a number of fascinating historic features. There are three large wall paintings over the north nave arcade. One shows Christ in Majesty, another depicts the Tree of the Seven Deadly Sins, and there is a large figure of St Christopher.

There are several notable tombs, including one to Edward Stillingfleet, Bishop of Worcester (born 1635). Another 17th-century tomb is to John Elliot, who died in 1641 at the age of only seven. Perhaps the most intriguing feature, however, is the pulpit, which dates to about 1440, making it easily among the oldest I've seen in an English country church.

The pulpit is beautifully carved, and bears the initials TP, possibly for Thomas Parker (d. 1421), an abbot of Tewkesbury Abbey.

Do take the opportunity to visit Cranborne Manor Gardens while you are visiting the village.