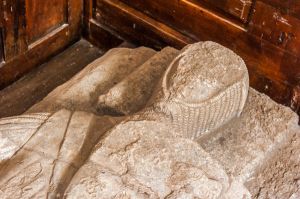 The church of St Wolfrida in Horton is a peculiar L-shape, the legacy of a Georgian rebuilding of an earlier medieval church. The first church here was part of a medieval Horton Abbey, but in 1401 a new church was built upon the same site. That 15th-century church consisted of a nave, chancel, and north transept.

By 1722 the church was in a ruinous condition, so it was almost completely rebuilt in the then-popular neo-classical Georgian style.

The old tower was torn down, and the material and all but one of the bells used to pay for the restoration. The new tower has a distinctive pointed roof and heavy cornice design, reminiscent of the work of Sir John Vanbrugh.

In fact, Vanbrugh is known to have worked on the nearby unfished Eastbury Manor house at Tarrant Gunville around the same time, so speculation suggests that either Vanbrugh designed the tower or his mason at Easton Manor was called on to build the tower at Horton.

Several memorials of historic interest were salvaged from the old church. among these is the monument to Henry Hastings, son of the 4th Earl of Huntingdon (d. 1650) and his wife Dorothy (d. 1658). Perhaps more interesting is a pair of 14th-century effigies to a knight and a lady.

These two effigies are thought to represent Sir Giles de Braose, who died in 1305, and his first wife Beatrice. Sir Giles's effigy is carved of Purbeck marble, much polished, and shows him with crossed legs resting on a lion, his hand on the hilt of his sword as if he is about to draw it forth.

The lady's effigy is of Ham Hill stone and is very worn, but still shows the beautifully carved folds of her gown. Her costume is that of the late 13th century, which makes sense, as we know that Sir Giles was married twice. Her feet rest on a pair of lapdogs.

The sculpture is perhaps not of the highest order, but it is rare to find effigies of females as old as this in any condition! One other memorial is of interest; behind the priest's stall, on the north wall, is a memorial to Victoria Uvedale, who died in 1680 at the age of only six years and nine months. 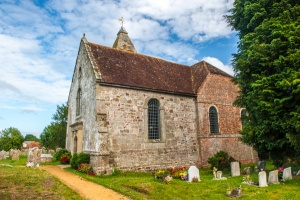 The exterior of St Wolfrida's 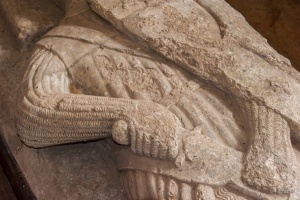 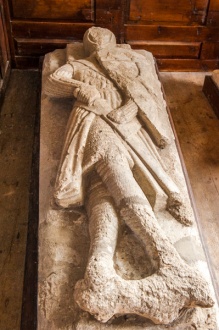 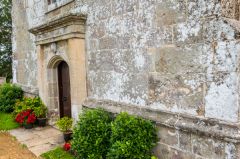 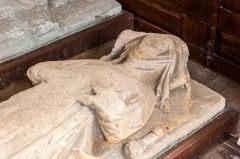 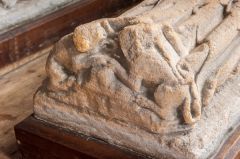