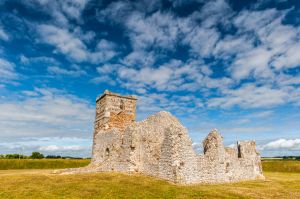 A fascinating historic site consisting of a ruined medieval church standing within the remains of a Neolithic henge earthwork. The juxtaposition of the Norman church and the prehistoric henge monument represents a quite striking combination of Christian and pre-Christian history.

Knowlton Church was begun in the 12th century. The chancel and nave both date to this period. The church underwent rebuilding and additions in the 15th and 18th centuries when the north aisle was added. The church fell into disrepair and was abandoned sometime in the 18th century. The walls are mainly of flint with ashlar dressings. The 12th-century font from Knowlton Church is now at nearby Woodlands Church of the Ascension.

The church stands within Church Henge, the largest of three henges at Knowlton. The henge consists of an earthwork enclosure formed by a bank and ditch, measuring approximately 106 metres by 94 metres in a roughly circular shape. The ditch is 10 metres wide and 1 metre deep, while the banks are 10 metres wide and up to 1.7 metres high.

Knowlton Church is part of a large complex of henge monuments, round barrows, and a Saxon cemetery, collectively known as the Knowlton Circles. It is interesting that the church was built a fair way off from the village it was meant to serve, yet in close proximity to the large group of prehistoric monuments.

NB. Don't confuse this St Clements church with a similar St Clements at Knowlton in Kent. 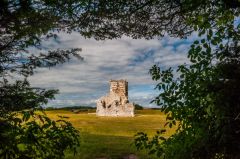 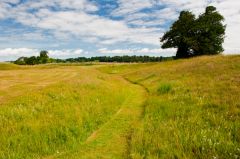 More self catering near Knowlton Church and Earthworks >>

More bed and breakfasts near Knowlton Church and Earthworks >>