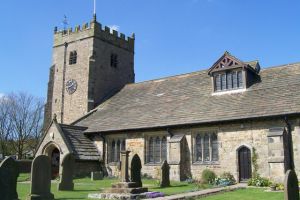 Chipping, St Bartholomew's Church
There may have been a church in the small village of Chipping as early as the late 6th century, though if so, no trace of it now exists. The current church is very much here, however; it is an attractive building, dating mostly to the 13th century, with subsequent rebuilding in the 16th and 19th centuries.

The medieval church was substantially rebuilt in 1506 with sandstone rubble, beneath a slate roof. The church consists of a nave, chancel, two aisles, south porch, and west tower.

During restoration work in 1872 a Saxon basin was discovered, measuring about 2 feet high and 18 inches wide. This basin may have been used as a font; it is undecorated save for a pair of lines at the brim about 2 inches apart. The only other real point of historical interest is a Henry Wills organ, made in 1876.

As of this writing, the church is normally open afternoons except Monday.

This beautiful country retreat is positioned in the Ribble Valley near the village of Chipping and can sleep 22 people in 10 holiday units.
Sleeps 22

This lovely apartment has wi-fi and is pet friendly in the village of Chipping in Lancashire and can sleep 2 people in 1 bedroom.
Sleeps 2

The Ship Hotel New Romney is a 15th century pub & hotel situated in the heart of Romney Marsh. With a large restaurant seating over 70 people a conservatory a fully heated patio garden 10 comfortable en suite bedrooms & an indoor & outdoor bar. The hotel is tastefully decorated … more >>