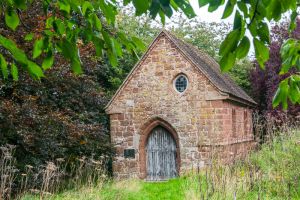 When the medieval parish church of Longford was pulled down in 1803 to make way for a new church, the south aisle was spared. The aisle lives on as the Talbot Chapel, so named because it contains a wonderful monument to Thomas Talbot (d. 1686) and his wife (d. 1706).

Such is the size of the monument that the south windows of the aisle had to be blocked to make way for it. The blocked north arch can clearly be seen where it used to join the aisle to the chancel.

As for the chapel, it is not in regular use and is cared for by the Churches Conservation Trust, who generally keep it open.

I love visiting churches in the care of the Churches Conservation Trust. Now, having said that, one of my pet peeves about the CCT is the occasionally haphazard signposting to their properties. In the case of the Talbot Chapel, I'll amend that to say 'non-existent' signposting.

There were absolutely no signs to the chapel from the main road. What I found instead was a locked gate down the lane to St Mary's church, and a very clear 'private dwelling' sign. I thought at first I'd come to the wrong place. Luckily, though the gate was locked, there was a gap in the hedge protecting the neighbouring farm field. 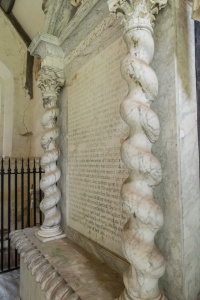 There were no signs saying 'keep out' so I carefully walked down the edge of the field, taking care to stay clear of the crops, until I could safely step onto the drive to St Mary's church. Even then, there were no signs, and I was rather worried I'd see an irate owner asking me what I thought I was doing on his property.

Luckily there was no one about, and I took the drive past the church/dwelling, and the Chapel appeared, half-hidden by hedges and a screen of trees. Only then did I find a small CCT sign, outside the Chapel door.

Having finally found the Chapel, I must say it was a fascinating building. You can clearly see where the chapel joined the rest of the medieval church, with obvious blocked arches and windows.

Inside the weather-worn oak door is an extremely large and bulky font made of local red sandstone. Set into the floor behind the font are several grave slabs, including a fascinating medieval slab with a woman's head on low relief.

Against the left wall, set into a niche, is a 19th-century memorial to Ralph Leeke, who, according to his epitaph, was a 'diligent and unwearied magistrate'. Opposite the Leeke memorial, high on the whitewashed wall, is a fragment of wall painting, still quite colourful, depicting a fragment of a coat of arms.

Almost the entire remainder of the chapel is filled with the Talbot memorial, encased inside iron railings. At the top is a Talbot coat of arms, and on either side of a central panel is a quite exceptional pair of neoclassical columns with ornate capitals and twisted base, like corkscrews in stone. The columns are flanked by an extraordinary piece of carving like a pair of curtains tied back to reveal the inscription.

The skill of the stonemason in creating the fabric folds of the curtains is truly exceptional; it really does look like real fabric, carved from solid stone. The quality of craftsmanship on the Talbot monument is simply outstanding, and it is a wonderful example of early 18th-century work.

Other features inside the chapel include the simple timber roof, with exposed beams, and a deeply splayed rounded window to one side of the doorway.

Despite the difficulties finding the chapel, it was very enjoyable to visit, though it should not take long at all to explore the entire building. 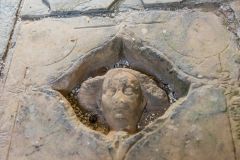 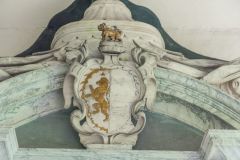 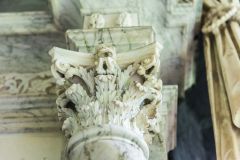 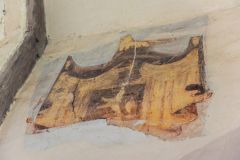 More self catering near Talbot Chapel >>