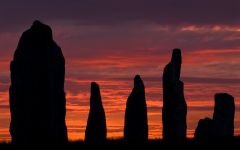 Another in my series of 'Best' UK attractions to visit; this time it is stone circles. The circles on my list come from all across the UK. Some are easily accessible, while others require a fair bit of determination to get to.

10. Rollright Stones, Oxfordshire
A small stone circle with a big legend attached to it. The Rollright Stones stand on a chalk ridge near Chipping Norton, Oxfordshire. There are three separate groups of stones; a circle, a solitary standing stone known as the King Stone, and a collapsed cromlech called the Whispering Knights. An old legend says that the knights were plotting against the king, and were turned to stone for their treachery.

9. Machrie Moor, Isle of Arran
Not a single stone circle, but the remains of 5 Bronze Age circles. The difference in the circles in intriguing - some of the stones are short and squat, others are tall and angular. Machrie Moor is rightly considered one of the most important archaeological sites in Britain.

8. Ring of Brodgar, Orkney
A late Neolithic circle overlooking Loch Harray, the Ring of Brodgar was originally composed of 60 stones, of which 27 remain upright. The whole is set within an enclosing ditch. A short distance away is the Stenness Standing Stones.

7. Long Meg and Her Daughters, Cumbria
The 3rd largest stone circle in England, yet Long Meg is one of the least known of the major circles. There is a large ring of 59 stones with several outlying stones, the largest of which is known as Long Meg. Several legends cling to the circle, including one that says the daughters were witches turned to stone by a saint.

6. Nine Ladies, Derbyshire
A small circle of nine stones, set in a wooded glade. Some 40 metres from the main circle is a solitary outlying stone.

5. Arbor Low, Derbyshire
Arbor Low has been called the Stonehenge of the North. The circle stands within an earlier henge monument measuring roughly 250 feet across. The stones lie flat, rather than standing upright. It is possible that they were knocked down by Christians suspicious of their pagan origins, but equally possible that they were never standing at all.

4. Castlerigg, Cumbria
Castlerigg was one of the first stone circles built in Britain, dating from about 3000 BC. It is set in a fantastic location in a bowl of hills just outside Keswick. The circle is flattened on the north side, where there may have been an entrance of some sort. A small mound inside the circle suggests a burial place.

3. Avebury, Wiltshire
For sheer size and scale, Avebury henge is a staggering achievement. Indeed, the circle is so large that the village of Avebury lies partly within the henge, or outer circle of stones, and a road splits the circle. An avenue of stones leads away from the circle towards Overton Hill, like a processional trail.

2. Callanish, Isle of Lewis
The most remote of the stone circles on this list, Callanish is a marvellous stone circle with avenues of stones leading away from a central grouping. It dates to the late Stone Age and early Bronze Age (i.e. over 4000 years ago). At the centre of the circle is a Neolithic burial chamber.

1. Stonehenge, Wiltshire
One of the most important archaeological sites in the world, Stonehenge is a stunning stone circle, built at the core of a landscape of ceremonial henges, barrows, and processional ways. Visitors cannot normally walk among the stones, so it is well worth getting together a group and taking advantage of an after-hours tour with a qualified group guide.

Ten Best lists are a bit of fun, but really, all they do is reflect the author's particular interests. After all, something that is 'the best' for one person is a drawback for another! That said, I have every confidence in recommending the stone circles on this list as wonderful places to visit.

Do I have a favourite? Hmmm ... well, it all depends when you ask me. My favourite is usually the last one I have visited!