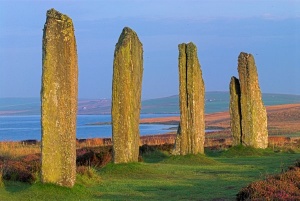 The Ring of Brodgar

A late Neolithic circle of 27 upright stones (originally 60 stones) with an enclosing ditch. Located a short distance from the Stones of Stenness stone circle. The location above two lochs is superb.

When was it built

The Ring was begun around the year 2500 BCE. There has never been a true excavation of the entire site, so we're a bit vague on dates. By comparison, 2500 BCE places Brodgar significantly later than many similar sites, like Stonehenge.

The ring is composed of an outer ditch, or henge, 340 feet across, and measuring 3 metres deep and 5 metres wide, with access causeways in the south-west and north-east of the henge. Within the henge enclosure is a circle of standing stones. There were originally 60 stones, but only 27 survive.

There are numerous outlying stones and cairns, including a solitary stone known as the Comet Stone, though whether these outliers played a part in the purpose of the Ring is open to debate. The size of the henge makes Brodgar the third-largest such site in the UK after Avebury and Stanton Drew.

The amount of work that went into the building of the circle is quite extraordinary. The ditch, for a start, was cut from solid bedrock. Some of the stones were cut from the bedrock on the site, others were quarried at Vestrafiold, Sandwick, over 7 miles away. 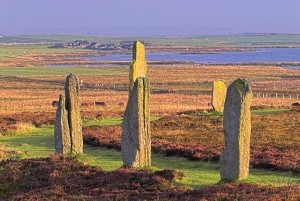 An astronomical observatory? A ceremonial centre? A religious shrine? The truth is, we don't know. It seems very likely that circles like this played a role as a form of calendar. The passage of the seasons was important to Neolithic people, whose lives were so closely tied to the weather and the seasons. It was important to them to keep track of the seasons.

At its most basic this meant knowing when winter had passed its worst and the promise of Spring growth was just ahead. By aligning the stones with specific stars, or the sun, at various times of the year, they could keep track of the passage of time. The circles may well have played a religious role; indeed it is hard to imagine that they did not, but what that role might have been we can only guess.

One unusual aspect of Brodgar is that it is almost circular in plan. This may seem an odd statement for a stone circle, but the truth is that most stone circles are not circular at all, but oval, or flattened on one side. Brodgar, by comparison, is as close to a true circle as you are likely to get.

The stones vary in height between 7 ft and 15 ft, making them much smaller than the huge stones at Stenness.

A local legend tells that the stones were a party of dancing giants who were turned to stone by the first rays of sunlight. The Comet Stone is said to be the giant who fiddled for his fellows until he too was petrified by the sun's rays.

Where to find Brodgar

The Ring is located on the B9055, just north of its intersection with the A965. The turning is well signposted and easy to find. There is a small parking area on the eastern side of the road that will hold a dozen or more cars, and there are pull-over places along the road for buses.

Alternatively, you can park at the Stones of Stenness at the southern end of Loch Harray and walk 1 mile or so along the B9055 to the Ring of Brodgar.

The location of the Ring plays a great part in its appeal; the circle is located on an isthmus known as The Ness of Brodgar between the lochs of Stenness and Harray. The scenic beauty of the location can match any circle in Britain. The area around Brodgar is rich in Neolithic sites. We mentioned the Stones of Stenness earlier.

Less than a mile away across Loch Harray is the chambered tomb of Maes Howe, while Unstan Chambered Tomb lies to the west. Together these sites, along with numerous unexcavated sites and the stone village of Skara Brae, form the Heart of Neolithic Orkney World Heritage Site.

You will see the ring variously called Brodgar and Brogar. The currently accepted spelling is Brodgar, which is closer to the Orcadian pronunciation. The meaning of the term is obscure, though it may come from the Old Norse word meaning Bridge Farm. The 'bridge' in this case is most likely the Ness of Brodgar; the narrow land bridge between the lochs of Stenness and Harray.

The Ring of Brodgar is one of the most beautifully situated prehistoric monuments in the UK. In my own experience, I'd have to put it in a group with Callanish, Stonehenge, and Castlerigg in the Lake District as the most scenic stone circles. Unlike Stonehenge, and to a lesser extent, Castlerigg, it is relatively quiet, and you may have the entire site to yourself.

Many visitors take advantage of long summer and early autumn evenings to visit the circle at sunset, particularly at midsummer. So be warned that you won't necessarily have peace and quiet if you do visit at dusk. Also, be aware that humans are not the only creatures to visit in the late evening. Midges are frequent visitors, if you are standing around and watching the sunset you are a tasty treat for the little blighters - so be warned! 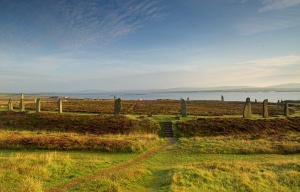 Dawn at the stone circle 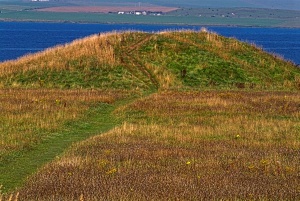 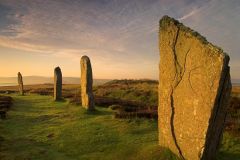 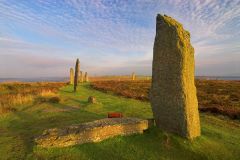 Nearby accommodation is calculated 'as the crow flies' from Ring of Brodgar. 'Nearest' may involve a long drive up and down glens or, if you are near the coast, may include a ferry ride! Please check the property map to make sure the location is right for you.

More self catering near Brodgar

More bed and breakfasts near Brodgar