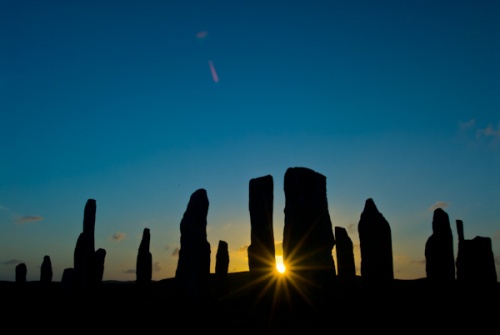 The stones were erected in several stages; the first stones erected were just a single line of stones running to the south. About 1000 years later a central cairn was added. Five centuries later the tomb was raided and then altered as part of a dwelling. Around 800 BC the peat began to encroach upon the site, gradually burying the stones to a depth of almost 2 metres in places.

Most of the stones are slender slabs of Lewisian gneiss, set so that their long axes are oriented along the line they are part of. A very tall central monolith 4.75 metres high is surrounded by a circle of 13 stones ranging up to 3.5 metres high. This circle is approximately 5 metres in diameter.

The northern avenue is composed of 9 and 10 stones (east and west sides of the avenue respectively). The avenue stretches 82 metres, and the stones are irregularly spaced. The eastern single line contains 5 stones, the western line 4 stones, and the southern also has 5 stones. That southern line is oriented almost exactly on a north/south line. 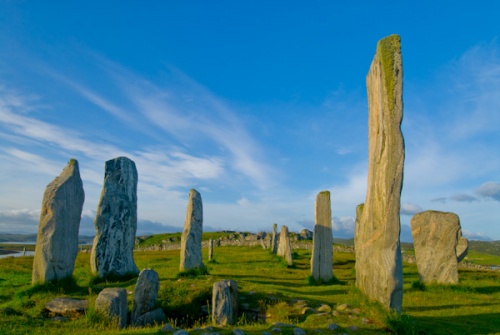 The lower section of many of the stones is a slightly paler colour than the top. This is not natural, but the result of peat accumulation. When the peat was partially cleared in 1857 by the local landowner, Sir James Matheson, a small chambered cairn was found in the eastern part of the circle.

Though this is the most widely known group of stones at Callanish, it is not the only one. Nearby is Callanish II, a group of 7 stones surrounding a ruined cairn. But there's more; five stones arranged in an oval shape form Callanish IV, to the west of the Uig road (B8011). Another small double circle, Callanish III, stands to the south-east of the main circle.

The short answer is that we don't know. The Name Book of 1853 recounts a local legend that the stones were a place of worship for druids. The book goes on to say that the stones cannot be counted, a recurrent theme for stone circles throughout the British Isles.

There are almost as many theories as there are visitors to the site! If you leave aside the more outrageous theories such as a landing site for UFOs, the most likely answer is that Callanish was built as part of a large ceremonial landscape, which may have served both religious and astronomical purposes.

How does it compare to other stone circles?

I have had the pleasure of visiting Stonehenge, Avebury, Brodgar, and Stenness. Hand on heart, Callanish deserves to be mentioned in the same breath as Stonehenge. True, the sheer size of the stones at Stonehenge make it the more amazing feat of engineering, but for sheer drama and beauty of the location, Callanish is more impressive. Looking out over Loch Roag, watching the mist rising off the loch, makes a visit to Callanish a memory that will last a lifetime. 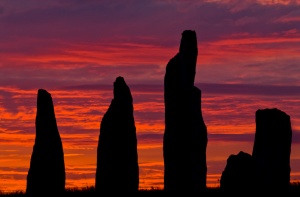 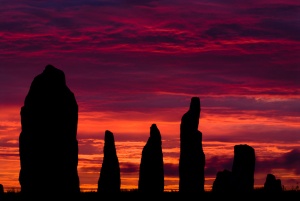 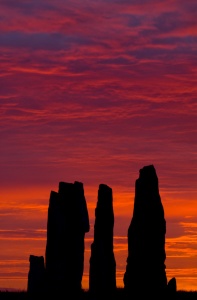 I wondered whether I should put these photos online. They look at first glance, so incredible, that I was concerned lest someone think they were 'Photoshopped'. In the end, I decided to just go ahead and share them, and tell a bit about the story behind them.

I came to Lewis with the express purpose of photographing Callanish (I'm kind of funny that way). I stayed at a hotel about 1 mile down the road. I looked carefully at the weather forecast and determined that the sun would rise around 4 am the next morning. Not wanting to miss a trick, I set my alarm for 2:45.

I didn't need the alarm in the end; I was so excited that I was up anyway. I got to the Callanish parking area at 3:00 am. The first very faint tinges of light were starting to lighten the sky. I lugged my camera gear up the hill to the site and waited.

What unfolded next is something I will treasure the rest of my life. The sky slowly turned pale orange, as the sun began to creep over the horizon.

Then, in an astonishing instant, the sky lit up like a burning beacon. I have never, ever seen such an incredible sight; the entire eastern sky was bright, bright red, as if it was on fire. I was so awed I almost froze in wonder, but I remembered why I had come and started clicking away.

For five minutes the sky stayed so red that it looked like some sort of psychedelic dream, before the colour gradually faded to something resembling a 'normal' sunrise. Yet those five minutes were the most amazing, astonishing, experience of nature I have ever had.

When I finally came to share my photos with my family I felt almost embarrassed by the vivid colours. Would they think I'd embellished the photos or exaggerated the event? Would anyone believe that it was even more dramatic than the photos could ever illustrate?

So all I can do is share these few examples of the dozens I took that morning. They may display differently depending on your exact monitor or computer setup, but I can assure you that if they look even the slightest bit surreal, the reality was even more incredible in person!

Callanish located on a minor road off the A858, about 15 miles from Stornoway. There is now a very nice modern visitor centre at the base of the hill, with plenty of parking.

Nearby accommodation is calculated 'as the crow flies' from Callanish Standing Stones. 'Nearest' may involve a long drive up and down glens or, if you are near the coast, may include a ferry ride! Please check the property map to make sure the location is right for you.

More self catering near Callanish

More bed and breakfasts near Callanish