HERITAGE HIGHLIGHTS:   What really makes the Rollright Stones fascinating are the legends associated with the site. 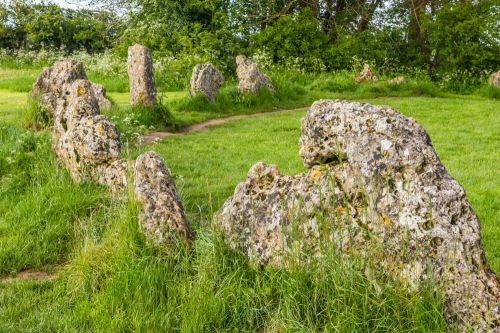 Situated atop a limestone ridge just north of Chipping Norton, Oxfordshire, this ancient site is not a single circle, but three separate groups of stones that include a stone circle, a solitary standing stone, and a cromlech, or burial mound. Together, the three clustered sites span the period 3,800-1500 BC.

The stone circle is in a small clearing just behind a belt of trees atop the ridge. The circle measures about one hundred feet across (31m), and the stones are fairly small, ranging from several inches high to almost 9 feet tall. Perhaps because of the secluded location, the circle has an atmosphere of quiet mystery. The circle is also known as the King's Men.

The stones are irregularly spaced, but drawings made by antiquarians suggest that there was originally a continuous wall of 105 stones placed side by side, with a small opening in the south west. Now only 70 stones remain, with several obvious gaps in the circle.

Two stones, one standing, one fallen, lie outside the circle, flanking the opening, which is directly opposite the tallest stone and would have formed an entrance portal. 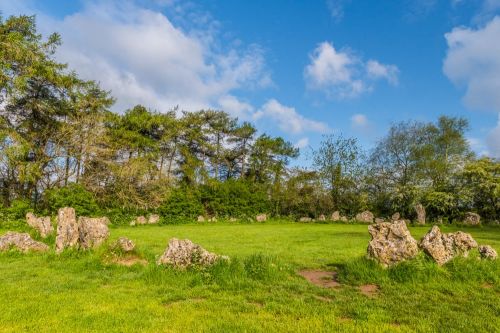 The stone circle from the south

The stones are all local surface boulders (i.e. they were not quarried), most likely found within 500m of the circle. It is estimated that a team of 20 people could have built the stone circle in a single month using only antler bone tools, fibre ropes, and timber levers to erect the stones.

The King's Men stone circle has become a focal point for modern ritual observance. We noticed small offerings such as coins, flowers, and candles left on ledges in the stones, and a tree overhanging the western end of the circle was festooned with colourful strips of cloth when we visited. 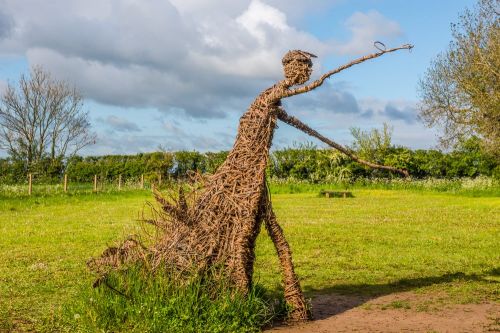 Outside the stone circle to the south is a modern sculpture created by Banbury-based sculptor of David Gosling. The sculpture, entitled The Rollright Witch, is made of woven pieces of willow, lime, hazel, and ivy, and brings to life the ancient story of the witch who turned a king and his army to stone (see below).

Legend says that if you try to count the number of standing stones you will always get a different result. A similar story is told about other stone circles in different areas of Britain. A twist on the story says that if you count the stones three times and get the same answer each time you will be granted a wish.

A local tale says that the largest stone, standing over 9 feet tall, was taken to make a clapper bridge over a local stream. According to the tale, it took 24 horses to drag the stone down the hill to the stream, and along the way it fell over and two men were killed. The stone was put in place, but it kept flipping over, and the farm crops failed, so the locals pulled t back up the hill (it only took two horses this time) and re-erected it in its original position. 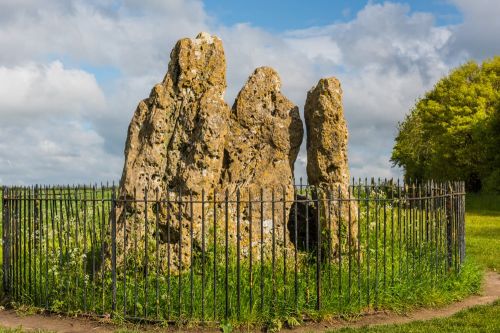 From the Kings Men stone circle a path leads along the top of a farm field, parallel to the road, before turning downhill and following the field boundary downhill to the second of the Rollright Stones sites; the Whispering Knights.

The Whispering Knights predate the Kings Men stone circle by over a thousand years. It was erected sometime around 3,800 BC by some of the first farming communities to settle here. It is a type of burial mound known as a portal dolmen. If you view the dolmen from the downhill side you can see that the two largest stones act as doorposts, with a third stone behind acting to close off the burial chamber.

The three stones were originally topped by a massive capstone, but this has fallen and now lies on the uphill side of the standing stones. Archaeologists believe that there were originally more upright stones and that the entire dolmen was covered with a low mound of stones. 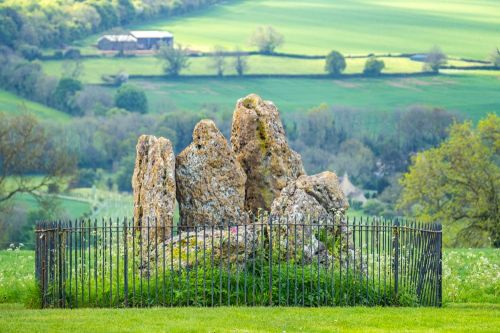 The Whispering Knights from uphill

The burial chamber would have held the disarticulated bones of several people. Interestingly, the burial chamber was reused multiple times, and local inhabitants were adding new burials as late as the Bronze Age.

Several legends attach to the stones. One says that they go down to the brook at the bottom of the hill for a drink on New Year's Day, or, alternatively, when the bells of Long Compton Church ring out. 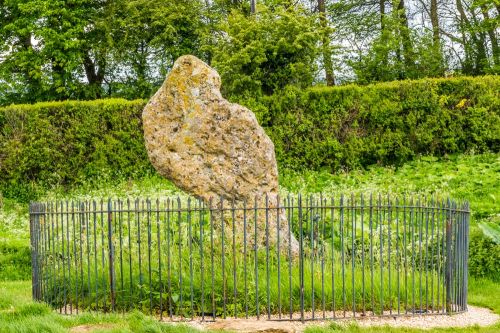 Across the road from the Kings Men stone circle and through a gate you come to a solitary standing stone known as the King Stone. Curiously, the stone is not sited on top of the hill, where it would be easily visible from the valley below, but in a small dell, or terrace.

This is the youngest of the sites that make up the Rollright Stones, being erected between 1800-1500 BC. It probably marked the location of a Bronze Age burial ground. Excavations have revealed at least two mounds near the standing stone, each containing evidence of cremated burials. Some of the cremations were marked by timber posts. It is possible that the King Stone was erected to act as a more permanent grave marker, replacing the wooden posts.

The King Stone's curious shape, described by the information panel on the site as being like a seal balancing a ball on its nose. is partly due to 19th-century drovers and other visitors who would break off pieces of the stone to act as good luck charms.

It was partly to stop wilful damage such as this that the Rollright Stones were among the first historic sites in the UK to be protected as Scheduled Ancient Monuments. 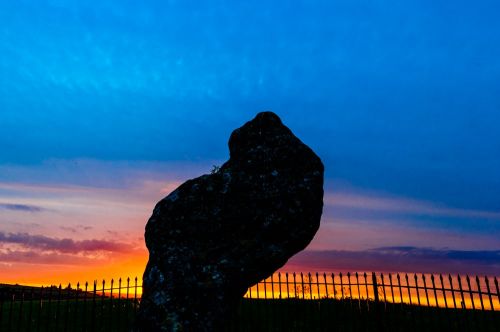 The King Stone at sunset

The story goes that a king of ancient England was marching along the ridge with his men (the main circle). They stopped to rest, and while the king (the King Stone) surveyed the way ahead, a group of knights went aside to plot against the king and were immediately turned to stone.

Another legend goes that while the king was surveying the scene he met a local witch. The witch made a bargain with him, saying,

'Seven long strides shalt thou take
If Long Compton thou canst see
King of England thou shalt be.'

The king, thinking this an easy bargain, replied, 'Stick, stock, stone, as King of England I shall be known.

The king took his allotted seven strides, but his view was blocked by the mound known locally as The Archdruid's Barrow. The witch triumphantly announced:

Whereupon the king and his men became stones, and the witch turned into an elder tree. Moral: don't bargain with witches.

The Rollright Stones are not spectacular, in the manner of Stonehenge, or Avebury, but that also means they are not thronged with tourists, as those better-known circles can be. 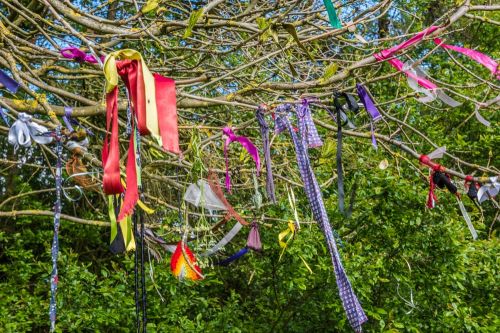 Offerings hang from a nearby tree

Located on Rollright Road, the minor road linking the A34 and the A3400. There are two small laybys for parking on the south side of the road (that is, heading west), though our family comes from the west and can usually manage to simply pull across the road and into the layby without any issues.

There is an honesty box by the entrance to the main circle, with a suggested donation, but the Whispering Knights and the King Stone can be seen for free. There are useful information panels at each site, and good signposts linking the sites, but no toilet or food facilities. Note that the footpath between the Kings Men stone circle and the Whispering Knights can be muddy in wet weather, so good footwear if definitely in order. 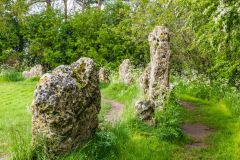 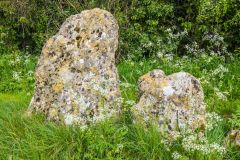 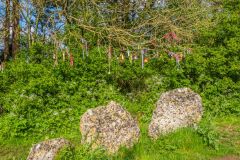 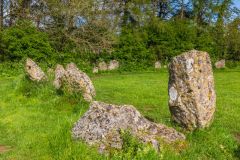 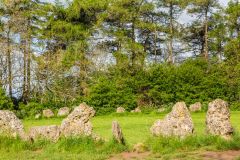 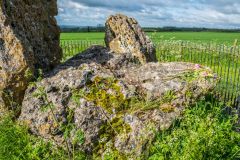 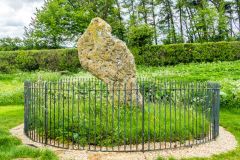 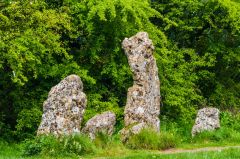 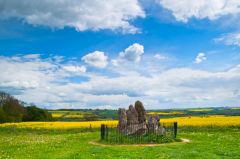 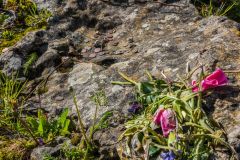 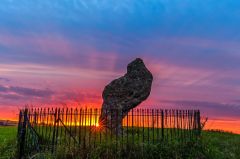 More self catering near Rollright Stones