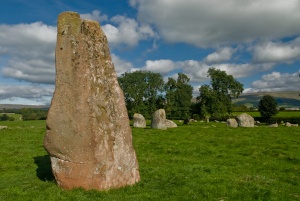 Long Meg and Her Daughters

On a sloping hillside near Penrith, Cumbria, lies the 3rd largest stone circle in England (after Avebury and Stanton Drew). Long Meg and her Daughters is composed of a large ring (more an ellipse than a circle) measuring 300 x 360 feet, and several large outlying stones. The largest of these outliers is Long Meg, the "mother stone" (see photo).

Long Meg is a 12 ft high piece of red sandstone standing about 240 ft from the circle of "daughter" stones. There are faint traces of spiral carvings in the face of Long Meg, in a style associated with the Bronze Age (c. 2000-900 BCE).

These carvings face away from the circle, a fact which has prompted speculation that the stone was erected at a different time period from the circle. A date of 2500-2000 BCE has been suggested.

The circle itself is composed of 59 large stones (the largest is a hefty 29 tons). These stones are of local porphyritic material. The relationship of Long Meg to the circle suggests the possibility that it may have been used to sight the midwinter sun.

Although on the ground the stones appear to be unprotected, aerial views show that there was once an earthen ring surrounding it.

More fascinating than the circle itself (unless you are an archaeologist) are the legends associated with it. Local folklore says that the stones were a coven of witches. They were celebrating their sabbath when a magician (or a saint) found them at it and turned them into stone. It is said that if the circle is moved or destroyed terrible misfortune (perhaps in the form of a ferocious storm) will fall upon those responsible.

It is also said that the stones are uncountable (this is a common legend associated with stone circles). Further, the legend says that if anyone does manage to count the stones twice in a row, the spell will be undone.

Another legend is unique to this site; it is said that if Long Meg herself was damaged, she would begin to bleed. 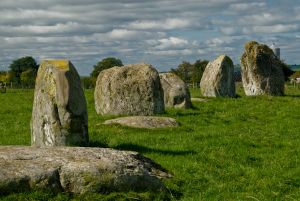 More self catering near Long Meg