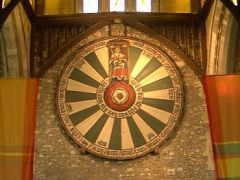 Quite a few places in Britain have been associated with the legends of King Arthur since the Arthurian stories were first written down in the Middle Ages. Some of these places associated with Arthur have gained almost mystical status among those interested in the Arthurian legends. Here are some of the major British places which have been linked with Arthur and his knights.

There are probably dozens of other, less well-known Arthurian sites about Britain, but these are the most popular.

More:
King Arthur on Britain Express
Caerleon and King Arthur - from the Caerleon town website
King Arthur and the Knights of the Round Table - a wonderful website for all things Arthurian