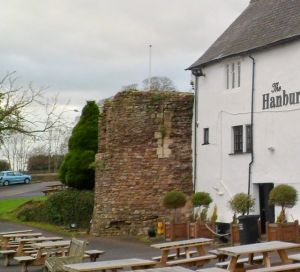 Caerleon Castle Round Tower
The Romans settled at Caerwent almost 2000 years ago, but the remains we see today are primarily those of a Norman motte and bailey castle of 1085 vintage. The motte was originally surmounted by a wooden tower, with a twin-towered gatehouse at the base of the motte and a bailey with at least two more towers.
Only the ruins of one 13th century tower stand, though there were likely at least four towers in the past. The castle was captured by the Welsh in 1217, but managed to withstand another attack in 1231. Caerleon is most famous as one of the rumoured locations of King Arthur's Camelot, though there are plenty of other sites with the same reputation!

The castle site is on private land, but can easily be seen from the nearby road.

More self catering near Caerleon Castle >>