HERITAGE HIGHLIGHTS:   Is this the original Camelot? 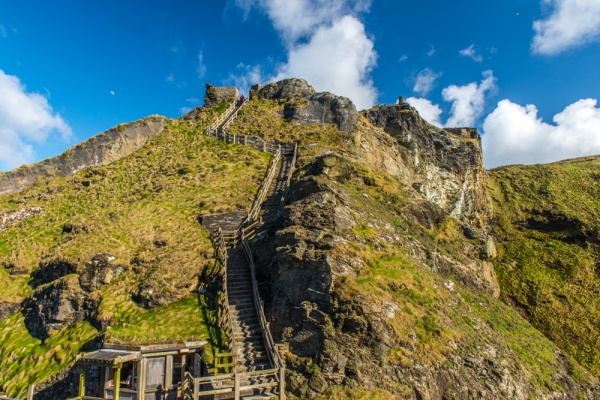 For sheer atmosphere, it is tough to beat Tintagel Castle. The 13th-century castle is a romantic ruin constructed on a windswept point of rock, with waves crashing all around. The castle is surrounded by Roman and Dark Ages remains, but more thoroughly surrounded by legends of King Arthur, who is said to have been born here.

Alternate legends claim that Tintagel is the site of Camelot, Arthur's court, though that honour is also claimed by a dozen or so places throughout the British Isles!

Who built the castle is not known for certain, but it seems likely that it was the work of Richard, Earl of Cornwall (brother to Henry III). Richard owned the site from about 1234, which seems to coincide neatly with the presumed age of the castle. Alternative theories attribute the castle to Reginald, Earl of Cornwall in 1135. 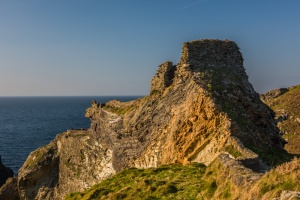 Ruins of the upper courtyard

The fortifications are divided into two sections, the upper and lower wards stand on the edge of a sheer cliff on the landward side, and the inner ward clings to a narrow ridge reaching to a small island.

The castle's inner ward was originally joined by a causeway to the mainland but erosion has destroyed much of the causeway and access is now by two steep stairways. Beyond the inner ward, the headland is filled with fascinating remains of castle outbuildings, and ruins of an early Dark Ages hut settlement.

Look for the remains of the medieval chapel, easily recognized by the stone altar at the east end, and the very unusual garden enclosure, probably built in response to the medieval fashion for romance and chivalric tales.

The garden is in such an exposed position that plants could never have remained alive for long, leading historians to speculate that the garden was only planted when a visit by the Earl of Cornwall was looming, and the rest of the time plants were grown in a much more sheltered spot.

It seems that the castle was not in use for long, and the hall was roofless by the mid 14th century, and the site was left to crumble. The remains of the hall give a good impression of its original size, and the inner ward retains much of its original masonry.

The site was in use long before the castle was built. The Romans engaged in tin mining here, and by the 5th century, Tintagel was a stronghold of the Cornish kings. Below the castle is Merlin's Cave, where the wizard Merlin was said to dwell.

The associations of Tintagel with King Arthur owes much to the tales of Geoffrey of Monmouth, whose 'History of Britain' (1139) made it the seat of Gorlois, Duke of Cornwall. Geoffrey's story tells that Uther Pendragon desired Gorlois' wife Igerna. Uther besieged the castle but was unable to overcome the defenders.

With the aid of Merlin, Uther assumed the likeness of Gorlois and visited the castle when the Duke was absent. Deceived by his likeness to her husband, Igerna yielded to Uther's advances, and Arthur was the result of their union.

There is no direct vehicle access to the castle. Visitors, including those arriving by tour bus, have to walk from Tintagel village centre, though a shuttle car is available for a fee, taking visitors between the visitor centre near the shore to the village. If you need the shuttle car to get around then you probably won't enjoy visiting the castle itself, for there is a lot of climbing involved!

It really is worth the exercise, though; seldom have I seen a more spectacular location, though on a windy day the island section of the castle can feel a desolate place, it really is exhilarating to explore the ruins. 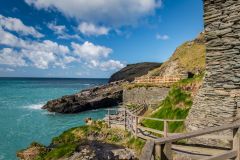 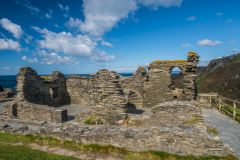 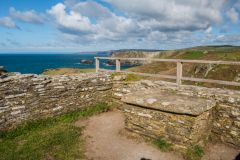 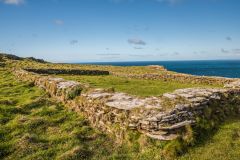 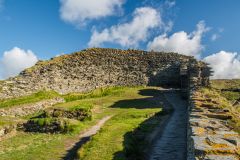 More self catering near Tintagel

More bed and breakfasts near Tintagel