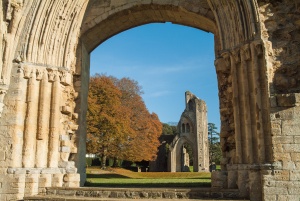 Legends of King Arthur swirl about Glastonbury like a tantalizing fog from the nearby Somerset marshes. The nearby hill fort at South Cadbury has long been suggested as the location for Camelot. Indeed, excavations of South Cadbury suggest that it was in use during the early 6th century, which is the likeliest era for the real Arthur to have lived.

The association of Arthur and Glastonbury goes back at least to the early Middle Ages. In the late 12th century the monks of Glastonbury Abbey announced that they had found the grave of Arthur and Guinivere, his queen. According to the monks, an excavation found a stone inscribed "Here lies Arthur, king." Below the stone, they found the bones of a large man and the smaller skeleton of a woman. The monks reburied the bones in the grounds of the abbey, where they were a very handy draw for pilgrims. The site of the grave can be seen today in the abbey grounds.

Glastonbury Tor, the enigmatic conical hill that rises above Glastonbury, has been linked with the Isle of Avalon, where King Arthur was buried after his death. This isn't so farfetched as it may sound, for a millennium ago the water level was much higher, and the tor would indeed have been an island. Avalon was also called "the isle of glass" which does suggest similarities to the name "Glastonbury".

The Holy Grail, the object of Arthur's questing, is said to be buried beneath Glastonbury Tor, and has also been linked to Chalice Well at the base of the Tor.

One final myth of Arthur at Glastonbury: the landscape around Glastonbury is said to have been moulded and shaped so that the features (such as roads, churches, and burial mounds) create a zodiac calendar replete with Arthurian symbology. Like so many of the Arthurian myths, so much is open to interpretation and your own predisposition to believe or disbelieve.