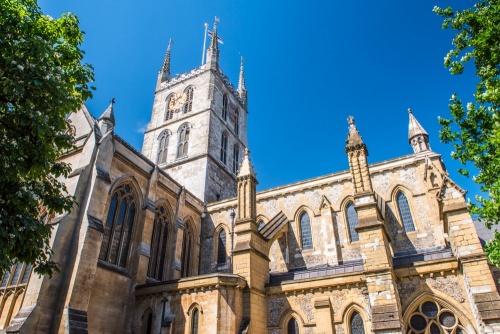 Formerly known as St Mary Overie ("over the river"), the parish church of Southwark only became a cathedral in 1905. Highlights include an ornate 16th-century screen behind the high altar, and a memorial to local resident William Shakespeare.

The church and the area around it have what might charitably be called a colourful history. The church was founded in Saxon times beside the original London Bridge, at the oldest crossing place of the River Thames.

Tradition suggests that there was a community of nuns living here as early as the 7th century. It seems likely that St Swithun, the 9th century Bishop of Winchester, replaced the nuns with a college of priests. We do know that there was a church here at the time of the Domesday Book of 1086.

That early monastic church was re-founded as an Augustinian priory in 1106 by the serving Bishop of Winchester and two Norman knights. The priory canons built a hospital beside the church. This Norman hospital was the predecessor of St Thomas Hospital, further to the west.

The chancel and retrochoir were rebuilt after a fire in 1212. The retrochoir is a rare medieval survivor in London.

The area around Southwark was governed by the Bishops of Winchester in the Middle Ages as a 'liberty', a sort of private kingdom.

Here they controlled a prison called The Clink, which gave its name to prisons the world over. Here also was the most infamous red-light district in Greater London, whose activities provided the major source of income for the bishops. In fact, the ladies employed in the brothels of Southwark were called 'the Bishop of Winchester's geese'. 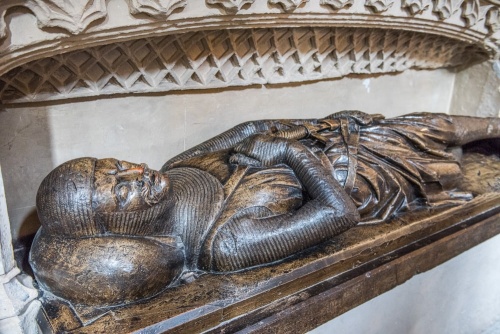 The priory was suppressed by Henry VIII in 1539. The church was renamed St Saviour's and leased by the king to the Southwark parishioners. In 1611 a group of wealthy parishioners known as the Bargainers bought the church outright from King James I. It was finally raised to cathedral status in 1905.

Perhaps the most impressive feature in the Cathedral is the richly decorated screen behind the high altar. The screen was installed in 1520 by Bishop Fox of Winchester. The screen is decorated with figures of people linked to the history of Southwark.

John Gower was a court poet for Richard II and Henry IV, a close friend of Geoffrey Chaucer. His colourful painted tomb shows his effigy lying on his most popular works, including the 'Confessio Amantis', a collection of love stories. One of Gower's poems featured the story of Pericles of Tyre, whose tale Shakespeare adapted for one of his final plays.

This beautiful 16th-century inlaid chest was made by German craftsmen who had settled in Southwark. It was given to St Mary Overie in 1588 by Alderman Hugh Offley. The chest was used to store parish records and other important documents. 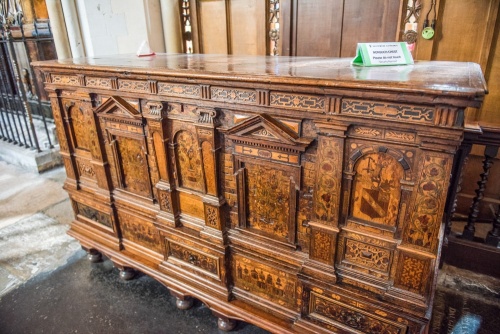 Wooden Effigy of a Knight

One of the most interesting memorials is a wooden effigy of an unknown knight. The knight is shown wearing a mail coat and coif. The style of armour suggests a date of about 1280. Though his identity is unknown, the knight may be a member of the powerful de Warenne family, who had strong links to the church at that time.

Bishop Lancelot Andrews (1555-1625) was a famous scholar. His prestige made him an obvious choice to work on the King James version of the Bible published in 1611. Bishop Andrews headed the committee that translated the first five books of the Old Testament into English.

Set into the south aisle wall is a memorial to dramatist William Shakespeare, whose Globe Theatre stood very close to the cathedral site. Above the tomb is a memorial window depicting scenes from several of Shakespeare's most popular plays. The window is modern, replacing one that was destroyed by bombs in WWI. In the tomb niche is an alabaster effigy of Shakespeare created in 1912.

Edmund Shakespeare, William's brother, is commemorated by a carved stone set into the floor of the choir. Next to the Shakespeare Memorial is a plaque commemorating Sam Wannamaker, the American actor responsible for building Shakespeare's Globe, a recreation of Shakespeare's original 16th-century playhouse. 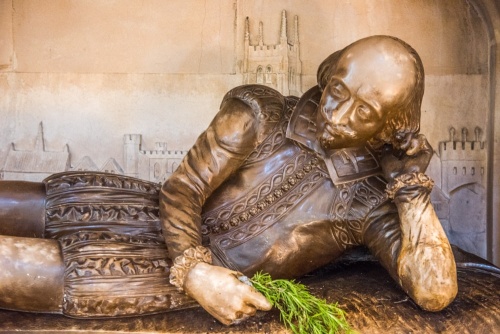 On the south side of the churchyard is a memorial to Mahomet Weyonomon, a Mohegan chief who sailed to England in 1735 to plead with George I to return Mohegan lands taken by British settlers in Connecticut. Weyonomon tragically caught smallpox and died before the king could receive his petition. Laws of the time prohibited foreigners from being buried within the City of London, so Weyonomon was buried in an unmarked grave in the churchyard. The memorial is carved from a pink granite stone brought from Connecticut.

One of the most modern memorials is one of the most poignant. In 1989 a Thames pleasure boat named The Marchioness sank near the Cathedral, with the loss of 51 lives. The memorial is shaped like a ship's wheel.

The Cathedral is very easy to reach from London Bridge tube and rail station. Take the Borough High Street exit and you will see the Cathedral immediately across the road, beside Borough Market. When we visited entrance was free, but if you plan on taking photos you will have to pay for an inexpensive photography permit. 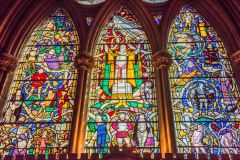 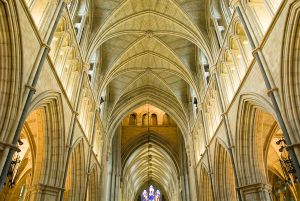 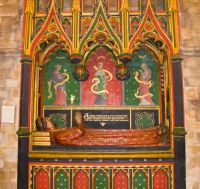 More self catering near Southwark Cathedral >>