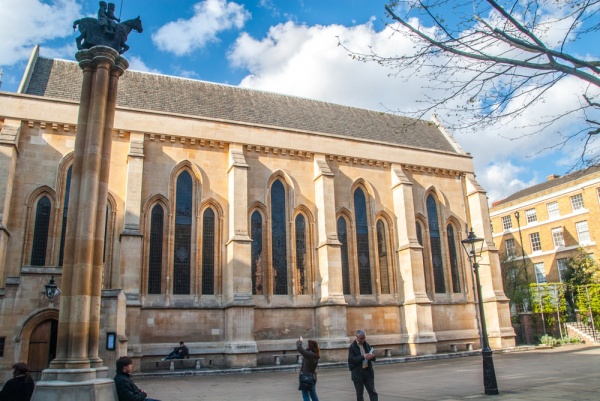 One of the oldest buildings in London, this delightful round church is tucked away in a quiet courtyard, just yards from the hurly-burly of busy Fleet Street to the north. Temple Church was built by the Knights Templar when they moved their London headquarters here from Holborn in 1186. 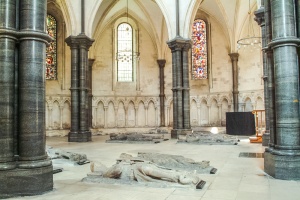 The Templars were founded in 1118 with the avowed mission of protecting Christian pilgrims journeying to Jerusalem. The order became enormously wealthy and created monasteries across all of Europe. Here, by the banks of the Thames, they built a small church and monastery. Eventually, their very wealth led to their downfall, as jealous monarchs moved to suppress the order.

In 1324 the Templar's property here was given to the more prudent Knights Hospitallers of St John, and some of the monastery buildings were rented to law students for accommodation. The law connection flourished, and the area became known as The Temple, the haunt of London's legal profession. Middle Temple Walk divides the maze of buildings that make up the district into Middle Temple and Inner Temple.

As for the church, it served as the chief place of worship for those involved in the legal profession. The original round plan, modelled after the Church of the Holy Sepulchre in Jerusalem, was amended with the addition of a Norman nave. The oldest parts of the building date from 1160-1185, with remodelling in 1220-1240.

Entering through the south door, a visitor is immediately struck by nine life-sized marble effigies of Knights Templar laid upon the floor of "The Round". The oldest of these effigies dates to 1227 and commemorates Sir Roger de Ros, but the name most familiar to visitors will be that of Sir William Marshall, Earl of Pembroke (d. 1219), the most famous knight of his era, and advisor to King John and Henry III.

If you have the good fortune to visit the church when sunlight is streaming through the windows above onto the effigies, you will be wonderfully rewarded, for the effect is marvellous.

The more traditional rectangular chancel was added in 1240, by Henry III. Henry originally intended to be buried here, but later changed his mind, and upon his death, his body was laid to rest in Westminster Abbey. Henry's young son, however, also named Henry, is buried here. 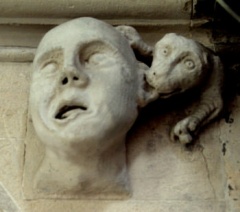 Take a close look at the columns supporting the nave. They lean outward at a marked angle. These are not the original columns; they were damaged by bombs in the Second World War. These replacement columns were intentionally angled outward just as the originals had been. The Round is ringed by a wonderful collection of medieval gargoyles.

Retrace your steps for a moment towards the entry and look down the small set of stairs. These lead to a tiny prison cell, where imprisoned knights were incarcerated.

As of this writing, the church is open Wednesday-Sunday, and at other times by arrangement, but please check the official website for an updated schedule. 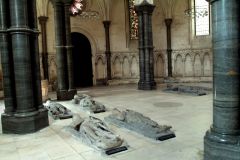 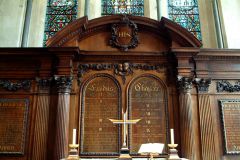 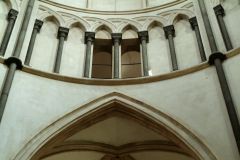 More self catering near Temple Church