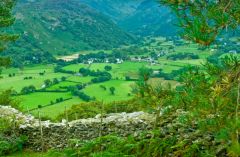 Well, the long, long process of nominating new British sites for World Heritage Site status has finally come to an end. The final list of 11 sites, plus 2 that had already been nominated, were announced by John Penrose, Tourism and Heritage Minister. Though some of the final sites are pretty obvious choices, others will raise a few eyebrows.

Well, they raised mine. Historic cities like Lincoln and York were overlooked in favour of former colonial locations like the Turks and Caicos Islands, a cave complex in Gibraltar, and the island of St Helena, where Napoleon was imprisoned. Other oddities include Charles Darwin's laboratory, which had previously been nominated. Historically interesting, yes. A World Heritage site? Hmm ....

What happens next?
The new Tentative List will be sent to UNESCO, who intend to nominate successful new sites from 2012. Sites that are awarded a nomination slot will then be voted on by the World Heritage Committee to determine any new additions to the list of World Heritage Sites.