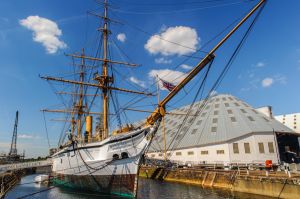 Around the year 1547, the Royal Navy began to use the stretch of the River Medway around Chatham for a pair of storage depots. By the reign of Elizabeth I Chatham was the major fleet base, and most of the navy vessels overwintered here. In 1570 a boatyard was begun at Sunne Hard to repair and maintain vessels in the Medway. The first ship to be built in the new yards was the Sunne, launched in 1586.

Only 2 short years later the shipwrights of Chatham were called on to help prepare England to face the might of the Spanish Armada. Most of the fleet that faced the Armada sailed from the Medway under the command of Lord Howard of Effingham, Elizabeth's Lord High Admiral. The Elizabethan dockyards were moved from Sunne Hard to the current location in Chatham in 1613, and no trace of the earlier site remains.

The core of the new dockyards were large drydocks, where new boats could be built, and existing ships maintained. The area around the drydocks developed into a huge complex of buildings, each fulfilling a special task. There were drying areas for masts, rope-making areas, carpentry areas, plus residences for officers and naval officials. The yards employed thousands of skilled craftsmen and must have been an amazing place, bustling with noise and activity. 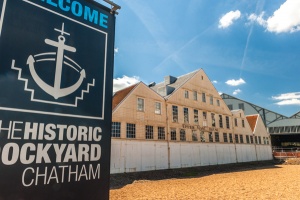 By the middle of the 18th century, the Royal Yards had become the largest industrial organisation in the world. It would not be too much of a stretch to claim that it was the skilled craftsmen of Chatham that were responsible for Britain's dominance of the seas.

Yet the prosperity at Chatham would not last; as British focus shifted away from the North Sea and the Channel to the Mediterranean and the Americas. The dockyards at Portsmouth and Plymouth better suited Britain's new role as a world sea power, and at the same time, the River Medway began to silt up. Chatham stopped being a base for the fleet and became instead a centre for repair and shipbuilding.

Perhaps the most famous ship to be built in the Chatham Dockyards was the HMS Victory, launched in 1765. The Victory was repaired here in 1797 and returned to sea in time to serve as Admiral Nelson's flagship at the Battle of Trafalgar in 1805.

The construction of sailing ships ceased in 1849 and the first screw-powered ship to be built at Chatham, the Horatio, launched in 1850. The 20th century saw a new stage, as attention at Chatham focussed on submarines. In total, 57 submarines were built here from 1908 until production ceased in 1960. 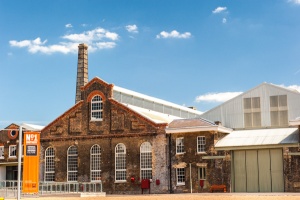 Set aside as a special museum area, with exhibits from the Imperial War Museum and the Royal Museums at Greenwich. On display are a wealth of scale ship models, paintings, and memorabilia. A Maritime Treasures Gallery displays naval art, and ship models, while the Pipebending floor shows how metal pipes were bent around pegs in the floor to make them fit the requirements of individual vessels.

This very large display area contains a museum of Chatham's role in Britain's naval history. See how some of the most famous vessels in our maritime history were built, with an emphasis on sail-powered, wooden-hulled warships. The gallery is themed around the story of a retired Master Shipwright named John North as he relives his career and encourages his grandson to follow in his footsteps.

This area of the Dockyards covers the history of Chatham through the turmoil of the Industrial Revolution, to the First, and Second World Wars. It spans the era from the launch of the first steam-powered ship, the Phoenix, in 1832, to the Okanagan, a submarine built for the Canadian navy in 1966.

One of the most popular areas of the Dockyards is this fascinating workshop. Rope was essential for sailing ships, and has been made at Chatham since 1618. A tour with costumed guides walks you through the process of rope making, and you can try your hand at traditional rope-making tools and techniques. The end of the tour is the ropewalk, which stretches fully 1/4 mile and still has its working Victorian equipment. 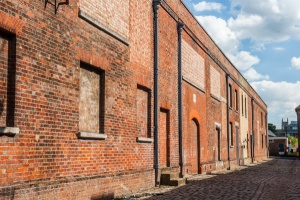 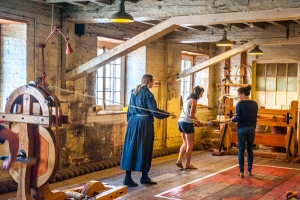 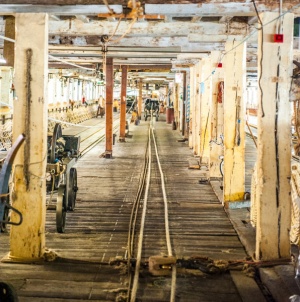 There are three historic vessels at Chatham for visitors to enjoy. One is a Victorian ship powered by steam and sail, one a WWII destroyer, and one a submarine.

This restored sloop was built in 1878 and was powered both by steam and sail. The hull is made of teak planks wrapped around an iron frame.

The Gannet was part of Britain's policy of 'gunboat diplomacy' in the last quarter of the 19th century, when Britain's worldwide Empire was protected and trade efforts strengthened with a strong naval presence. But enforcing Britain's naval prominence was not the Gannet's only role; she was meant to clamp down on slavery and piracy and at the same time chart the seas she sailed for the Admiralty's maps. The Gannet saw action just once in her long career; at Suakin, in 1886. The ship has now been restored to the way she was fitted out at that time. 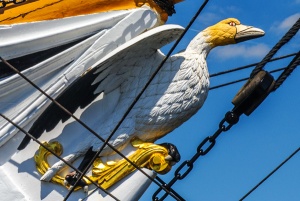 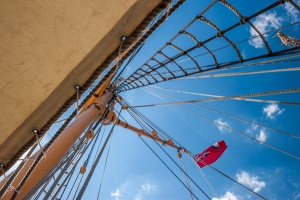 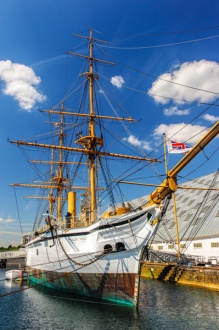 Built in 1944, the Cavalier was the last WWII destroyer to see action. It is preserved at Chatham as a memorial to the 11,000 men lost at sea in the war, and the 142 British destroyers sunk during the conflict. The Cavalier served in the Arctic and the Western Approaches before joining the Pacific Fleet. The ship sailed with the Far East Fleet and the Home Fleet until she was retired in 1972. Visitors can explore every corner of the restored vessel in a free-flow tour. 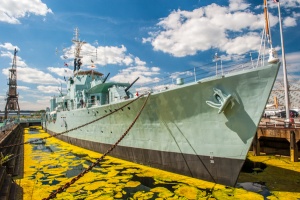 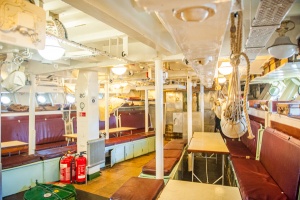 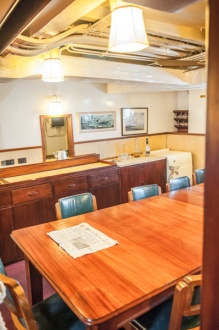 The last warship built at Chatham, the Ocelot launched in 1962. She is an 'O' class vessel, powered by diesel-electric engines. She saw service throughout the Cold War and was retired in 1991. The ship was manned by a crew of 69 - and frankly, they were cramped!

The Ocelot is the only one of the three historic vessels at Chatham that must be accessed by a guided tour. These tours are very popular, so I recommend you book a tour time as soon as you enter the Dockyards! The interior of the submarine is extremely cramped, but navigating the interior of the vessel on a tour really brings home what life must have been like for the crew. It's an eye-opening experience. 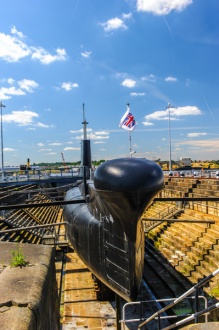 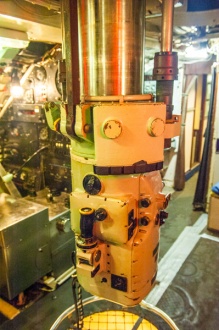 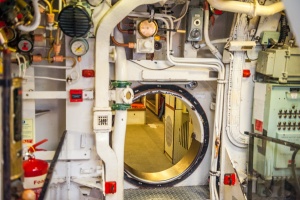 This elegant building was erected in 1704 as a residence for the Dockyard's commissioner Captain George St Lo. It is the oldest intact naval building in Britain and stands on the site of an even earlier building. Behind the House is a garden laid out in the 1640s.

Seventeen lifeboats are displayed in this fascinating exhibit. Relive the perilous tale of some of the RNLI's most famous and difficult rescues.

There is just so much history at Chatham it is almost too much to take in! Please give yourself plenty of time to explore the entire site. This is a vast historic site where you will want to take your time - and I guarantee you'll still end up missing something you wanted to see! I highly recommend booking tours for the historic vessels. The Victorian Ropery is also interesting, and don't miss the Assistant Harbour Master's House, built in 1770, and the ceremonial water gate behind it where visiting dignitaries came ashore. 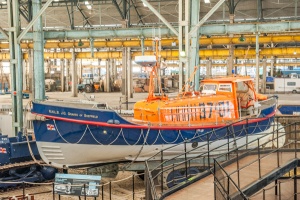 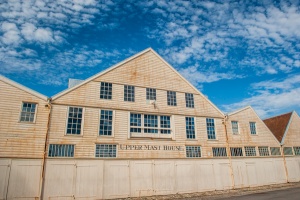 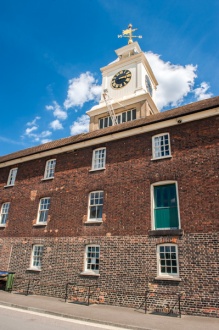