HERITAGE HIGHLIGHTS:   4000 years of historic remains in one site 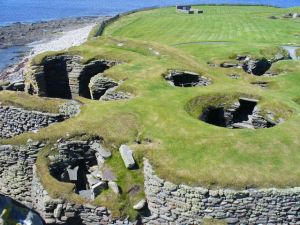 Jarlshof Prehistoric and Norse Settlement
Jarlshof is an extraordinary complex at the southern tip of Shetland's Mainland is not one archaeological site but several, with ruins spanning 4000 years in one location. The 3-acre site contains Neolithic houses, a Bronze Age village, an Iron Age settlement and broch, a Viking village, a medieval farm, and a 16th-century laird's hall.
What to See

History
In the late 19th century a violent storm exposed ancient stone walls which proved to be part of a settlement dating back as much as 6000 years. The local landowner began excavating in 1897, but it was not until 1957 that results were finally published, and what they showed was extraordinary.

The Bronze Age
The earliest remains from the first wave of settlement in Shetland is a smithy, built about 800 BC, with a complex of beehive stone huts. The huts are distinctive because they are braced by buttresses extending inside the living space, not outside as you might expect. The internal buttress walls helped create separate areas within the huts. These huts are similar to those at the celebrated stone village of Skara Brae on Orkney, though smaller in size. 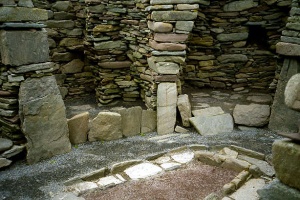 Inside a wheelhouse (c) Islandhopper

The huts provide a fascinating glimpse into Bronze Age civilisation. A whalebone stuck into a stone wall might have been used to tether animals, and broken moulds found in the smithy show that a variety of small objects were made here, including pins, knives, axes, and swords. One fascinating object found during excavations is a 'plaque' of bone, decorated with lines, with three holes at each end. No one knows what it was used for.

The Iron Age
In the Iron Age, beginning around 200 BC, a new settlement was built atop the Bronze Age huts. The Iron Age stone houses are round like their ancestors but without internal buttresses. This meant they had more space inside the living area. Two of the huts were linked to underground storage areas, or souterrains. A third souterrain runs directly underneath the hearth, perhaps as a means of keeping grain dry. The Jarlshof wheelhouses were built entirely above ground, unlike wheelhouses in other parts of Scotland, which were built partly underground.

The Iron Age site seems to have fallen out of use briefly, but when inhabitants returned they built a stone tower, or broch. The broch walls are only 2.4 metres high now, but if we can judge by nearby Mousa Broch, the tower would have originally stood as high as 13 metres. Secondary buildings were erected near the broch, including stone byres for cattle and an aisled roundhouse.

The broch seems to have collapsed in the early centuries AD, and instead of rebuilding it, the inhabitants create at least four wheelhouses, using stone from the collapsed broch. One wheelhouse is almost completely intact and you can get a good view of the exceptional stonework required to build corbelled cells, or chambers within the house. During this phase Jarlshof was probably occupied by the Picts.

Objects found from this period include a piece of slate with a cross symbol painted on it and a Pictish symbol stone with traditional Z-rod and double-disc symbols. This is one of just 2 Pictish stones ever found on Shetland. 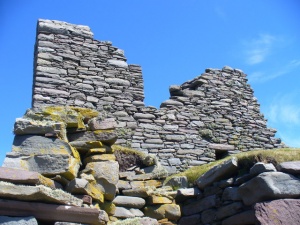 Ruins of the laird's house (c) Colin Smith
The Norse Settlement
The Picts in Shetland were replaced in time by the Norse, and in the 9th century Vikings from Norway settled here and probably occupied the site continuously until the 14th century. They built a traditional longhouse, which was the core of a farming complex. This was the first Viking longhouse found in Britain. The Norse stayed for several centuries (Historic Scotland estimates 12-16 generations), over which time they added numerous outbuildings, including a barn and corn drying kilns.

Seven Norse houses have been discovered, though it seems that only 2 were ever occupied at the same time. One peculiar structure with a large hearth may have served as a sauna. The largest building began as a house but was later adapted as a barn. It has a peculiar, narrow doorway, that at first glance appears too small to admit a cow. However, finds on Unst suggest that the doorways were simply narrow at the base, then widened out higher up to allow a cow to pass through.

Finds from the Norse settlement include a large number of loom weights, used for weaving wool, and line weights for fishing. Graffiti etched on slate shows likenesses of Viking ships, a bearded man, and a four-legged animal. The drawings are very similar in style to earlier Pictish art.

Taken as a whole, Jarlshof has the largest amount of visible remains of any Viking site in Britain.

Jarlshof House
Begun as a medieval farmhouse and later adapted as a laird's house, probably by Robert Stewart, the 1st Earl of Orkney. In 1592 the Bruce family of Symbister leased the Sumburgh site and occupied the house, called today the Old House of Sumburgh, which overlooks the earlier settlements. The tyrannical 2nd Earl of Orkney, Patrick Stewart, rebuilt the house when he briefly seized it from the Bruce family. The Earl was back in 1608 to ransack the house. By the end of the 17th century the house had been abandoned and allowed to decay. In the courtyard outside the laird's house are stones said to mark the graves of shipwrecked sailors.

What's in a Name?
The name Jarlshof was invented by author Sir Walter Scott in his novel The Pirate, and combines two words meaning 'Earl's house'. Scott refers to a completely fictitious house modelled after the Old House of Sumburgh. Were it not for Scott's efforts the actual name of the site would be simply 'Sumburgh', which comes from the old Norse term for a fort.

Getting There
Jarlshof is at the southern tip of Mainland. The site is usually open daily though may close during extreme weather conditions. In winter tickets can be purchased at the Sumbugh Hotel. Objects from excavations at the site can be seen in the modern visitor centre.

Images are copyright as noted, and are republished with gratitude under a Creative Commons license

Nearby accommodation is calculated 'as the crow flies' from Jarlshof Prehistoric and Norse Settlement. 'Nearest' may involve a long drive up and down glens or, if you are near the coast, may include a ferry ride! Please check the property map to make sure the location is right for you.

More self catering near Jarlshof Prehistoric and Norse Settlement >>

More bed and breakfasts near Jarlshof Prehistoric and Norse Settlement >>