Historic places to visit in Norfolk 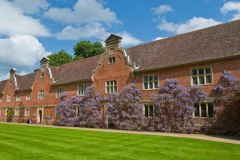 I might have bitten off more than I can chew with this post, as there's so much to see in Norfolk. I've visited on at least 4 occasions and each time I find something new to explore and enjoy. I was originally going to call this article simply 'places to visit in Norfolk' but I quickly realised there were so many interesting places to choose from that I needed to narrow down the focus a bit. So for this peek at one of my favourite areas of Britain I'm going to focus on historic places. As always, these are places I've personally visited and can recommend from experience. Ready? Here we go.

Blickling Hall - I visited Blickling with my family, who, if truth be told, could have been forgiven for thinking, 'oh, no, not another stately home!'. Well, if I was worried about dragging them around against their wil I need not have worried. They were so excited by Blickling that they begged to come back the next day (we did). The gardens are wonderful, and the house itself is absolute gem, full of fascinating historic furnishings and art. Blickling is one of my favourite historic houses in England.

Thetford - there is so much to see in and around Thetford. I'm amazed that it doesn't seem more widely known. There are the ruins of a 12th century medieval priory, the largest Norman castle mound in England, several historic churches, the Ancient House Museum (housed in a 15th century merchant's house), the birthplace of Thomas Paine, and more interesting timber-framed buildings than you can shake a stick at. Five miles away is Grimes Graves, a Neolithic flint mine.

Norwich - I can't talk about historic places in Norfolk without mentioning Norwich. My family adored our visit. At the heart of the city is the superb cathedral, one of the most interesting medieval churches in England, and well worth an extended visit. But the cathedral is only one of many historic churches, including St John Maddermarket, a wonderful example of Decorated Gothic style. St Peter Hungate now houses an exhibition of medieval stained glass. Nearby is the Norman Castle, sitting high atop its mound.

Oxburgh Hall - a Tudor tour de force, a wonderful 16th century moated mansion approached through a massive gatehouse. Beside the Hall is the partially ruined church, where the Bedingfield chapel contains a pair of staggeringly beautiful terracotta tombs.

Wymondham - this pretty market town is centred on the old market place, with its timber-framed market cross (now a tourist information point and small museum). A short stroll away is Wymondham Abbey, founded in the early 12th century and famous for its pair of imposing towers which can be seen for miles around. A short walk from the markep place brings you to Wymondham Heritage Museum, based in a model prison built to replace a medieval gaol known as one of the most terrible in the country.

Baconsthorpe Castle - if there is one place on this list that qualifies as a hidden treasure it is Baconsthorpe. This moated fortified manor is located in a remote rural location, far from the tourist hordes. Chances are if you make the trip you will find Baconsthorpe deserted. I came on a summer evening, and thought I'd seldom found a more atmospheric historic site.

Castle Acre - a small village packed with history, based around one of the prettiest village greens in the county. At one end of the village is a huge Norman earthwork with remains of the later castle buildings. At the other end of the green are the ruins of Castle Acre Priory, a wonderful ruined monastery.

Walsingham Priory - it is impossible to mention the words 'history' and 'Norfolk' in the same sentence without also mentioning Walsingham. Pilgrims have flocked to this attractive little village for centuries to visit the Shrine of Our Lady of Walsingham. A priory grew up around the shrine, which now stands in attractive gardens. A short walk from Walsingham Priory is the delightful parish church, which boasts a superb Seven Sacrament font, still bearing the marks of a disastrous fire.

Holkham Hall - one of the showpiece houses of Norfolk, Holkham is a masterpiece of a Palladian stately home, one of the finest surviving works by William Kent, who also designed the gardens.

Creake Abbey - the ruins of a small 13th century abbey slumber in a peaceful countryside setting, forgotten by time. The abbey was dissolved when all the monks died of the plague. Not overwhelming, certainly nothing to match some of the larger ruined monasteries in terms of architecture, but there's something appealing about this small and mostly forgotten rural abbey.