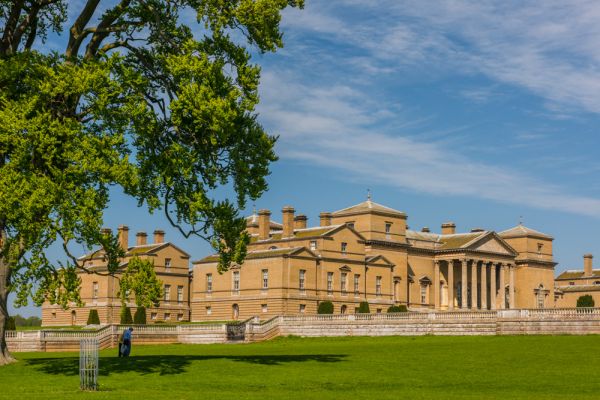 One of the truly great stately homes of England, Holkham Hall was begun in 1734 by Thomas Coke, the 1st Earl of Leicester. Like many young men of his era, Coke was heavily influenced by his exposure to the classical Greek and Roman art and architecture he encountered during his Grand Tour of the European continent.

In Coke's case, his tour lasted 6 years, and in the course of his travels across Europe he acquired numerous paintings, sculpture, manuscripts, and books.

In Rome, he encountered Lord Burlington, one of the leading lights of a new English enthusiasm for Palladianism and neo-classical style. With Burlington was William Kent, who would go on to design Chiswick House for his patron, incorporating many of Burlington's classical ideals.

The encounter with Burlington and Kent made a lasting impression on Coke, and he returned home full of enthusiasm for the neo-classical style. In fact, he took lessons in architecture so that he could understand and contribute to the design of a luxurious new house based on classical ideals.

With the help of William Kent and Matthew Brettingham, Coke set out an ambitious plan to create a sweeping mansion to replace the Elizabethan manor of Hill Hall, which had been his family's home since Sir Edward Coke bought the estate from the Neal family in 1609. 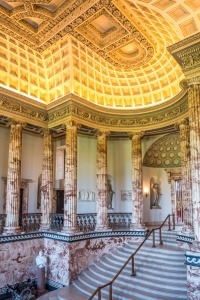 The design created by Coke and Kent - and implemented by Brettingham - was based around a central block with four wings. It may give some idea of the scale of Coke's design to realise that any one of the four wings was large enough for a modest country house all on its own.

So large and ambitious was the project that most of the existing village of Holkham had to be demolished. Coke was very conscious of the public ridicule that had been levelled at Chatsworth Hall in Derbyshire when that grandious new house was built without regard for actual living quarters for the family and servants.

At Holkham, the work began with one of the four wings, to provide a living space for the family while the rest of the house was being built. Work began in 1734, and only when the family wing was finished in 1741 did work start on the central block.

Building was slow, in part because the family finances suffered a major blow with failed South Sea investments, and again when their steward stole huge sums of money. The result of these financial setbacks is that the house never suffered any major alterations or rebuilding with changing fashions over the centuries, and remains largely unaltered from its original design. 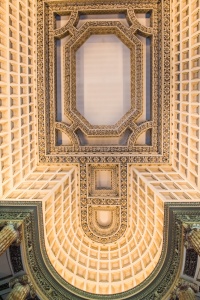 Thomas Coke died in 1759, long before his ambitious new house was complete. His widow, Lady Leicester, carried on the project, supervising the work herself and maintaining meticulous records. She fell out with Brettingham and called in James Miller to finish the job, and between them they are responsible for completing the most impressive features at Holkham, the state rooms and the awe-inspiring Marble Hall, with its high coffered ceiling and Ionic colonnades.

After Lord Leicester's death, the estate passed to a nephew named Wenman Roberts. As was customary among the nobility at the time, Roberts changed his surname when he took up his inheritance, becoming Wenman Coke. His son, also named Thomas, is known to history as Coke of Norfolk and is easily the most famous owner of Holkham Hall.

Thomas Coke is best known as an agricultural reformer. During the 66 years, he resided at Holkham (1776-1842) Coke instituted numerous revolutionary methods in animal husbandry and estate management. His fame spread across Europe, and people flocked to Holkham to see for themselves what 'Coke of Norfolk' was up to.

The annual sheep shearing at Holkham, known as 'Coke's Clippings', was an event of national importance that is hard to imagine today. Coke famously refused a peerage on numerous occasions, preferring to remain plain Mr Coke.

When the Prince Regent 'threatened' to knight him, Coke replied that he would break the Prince's sword if he tried. In the end he did accept a new earldom of Leicester, for the sake of his daughters' social standing. 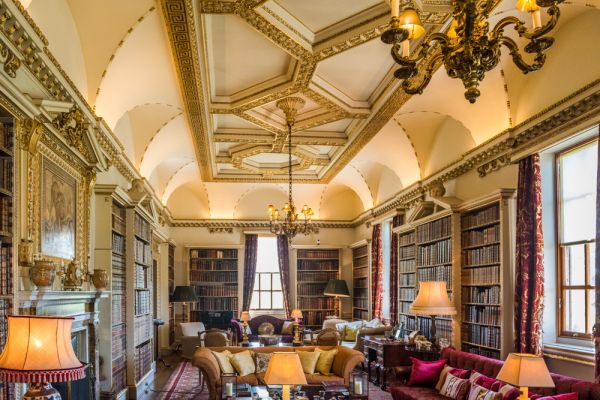 The library at Holkham

The house has been little altered since Coke of Norfolk's day. The interior is an opulent extravaganza of Italianate details, classical mouldings, ornate ceilings, and magnificent artwork. The Marble Hall is the highlight, an extraordinary space so high and bright, topped by an ornately coffered ceiling, arranged like an Italian basilica.

A broad stair leads from the hall to a range of state rooms filled with Old Master paintings and English treasures like Gainsborough and van Dyck. The collection of paintings is equalled by the special sculpture gallery, many of the statues gathered by the 1st Earl on his Grand Tour. Another highlight is the exquisite family chapel.

The house is set in a superb landscape of parkland and water features. Herds of red deer and fallow deer wander the park, and classical follies dot the parkland. Within the grounds is St Withburga's church, the medieval parish church of Holkham village.

The church has a 13th-century tower, but much of the current building dates to a Victorian restoration for the 2nd Earl. Other features at Holkham include a Bygones Museum in the stable block, incorporating a History of Farming exhibition which helps explain the contributions of Coke of Norfolk towards the modernisation of English agriculture. There is a six acred walled garden laid out by Samuel Wyatt in the late 18th century.

I have two abiding memories of visiting Holkham. As I arrived, a cricket match was being played on a small field in front of the house, a local tradition, I gathered. The combination of the white-clad cricketers with the palatial country house as a backdrop for their game created an unforgettable sight, a sort of microcosm of English tradition and nostalgia.

The other memory that lingers was something that happened as I entered the astonishing marble entry hall. As I lingered, my gaze drawn inexorably upward to take in the coffered ceiling high above me, a family with a young girl stopped to ask a guide if the girl could play the grand piano sitting in one corner of the hall. The guide was only too pleased to lead the young pianist to the polished and gleaming concert grand piano.

I am no music expert, but the sound of the beautiful classical piano music echoing around the entrance hall was otherworldly in its magnificence. People gathered to listen, smiles on their faces, as the girl played. It was truly a wonderful experience to hear music filling that grand marbled space. 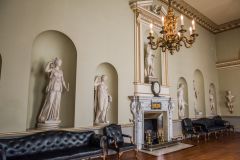 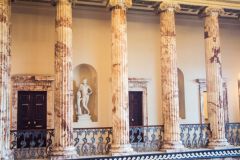 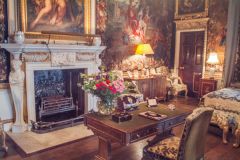 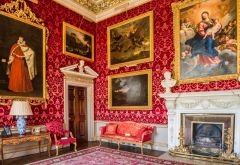 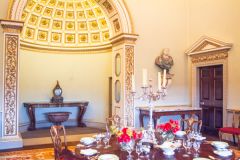 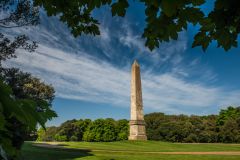 More self catering near Holkham Hall

Self Catering near Wells-next-the-Sea