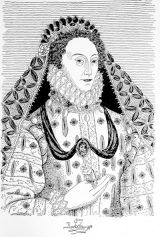 When I was poking around a musty old second-hand book store in Calgary, Canada several decades ago, I stumbled across a huge leather-bound book in a glass case, set aside like it was the crown jewels. I asked the bookstore owner for a closer look and as soon as I opened the creaking cover of the book I knew I had to buy it. The book was entitled 'A History of the British Nation', written in 1912 by an Oxford scholar named AD Innes.

The book is an absolute treasure, a history of Britain from the dawn of the Roman age to the accession of King George V. Not only is it beautifully written, but it is filled with gorgeous illustrations and maps drawn from original historical sources. I used the History of the British Nation as a source of inspiration when I wrote our own History section for the Britain Express website.

Why am I telling you all this?

Because I've now managed to put the entire book online. After about four years of work, more spell-correcting than I ever imagined, and innumerable cups of coffee, I am happy to announce that the full text of the book is now part of our popular History guide.

Why is this of interest?

If you enjoy British History, you will LOVE this book! Its beautifully written, and covers the major events in British history in great detail. And it is absolutely fascinating to see what a historian writing in 1912 thought about Britain's past and immediate future.

You have to remember as you read that the author is writing at a time when the Boer War was still fresh in people's minds, when the First World War had not yet immersed Europe in turmoil, when the British overseas Empire was at its height - in short, when Britain really did 'rule the waves'. His attitudes provide a fascinating glimpse into the post-Victorian mind.

More important - the book covers British history both at home and abroad. When I wrote our award-winning history guide (yes, really, it has won awards) I concentrated intentionally on history within Britain, with the idea of providing information that would be useful to people travelling around the UK. So, for example, I didn't include information on continental events like the battles of Agincourt and Crecy, or the building of the British Empire, or foreign affairs.

But with the publication of the History of Britain, we are able to more than double the amount of historical information in our history guide. If you want to know about the British East India Company and Clive of India, we've got it. If you want to learn about British attitudes to the American War of Independence, it's here. If you want to read how Wellington managed to defeat Napoleon, it all here, too.

I love the 'A History of the British Nation' book. Its a wonderfully written beautifully illustrated volume, and well worth an extended read.

One challenge I faced when putting this book online was that it wasn't written for a website audience! The chapters are long, and not easily divided into short 'easy on the eye' single topics. I've done the best I can to chop the text up into logical chunks that make for easier reading, but in many cases to really get an idea of the topic it will help to read two or three previous articles leading up to the topic you are interested in. The navigation is laid out to lead you seamlessly from one article to the next, so it's easy to go from Roman, to Dark Ages, to Medieval, to Tudor, Stuart, Georgian, and finally, the Victorian period.

The History of Britain Challenge
The original book is 976 pages long, plus odd bits of indexes and tables of contents, so it weighs in at just under 1000 pages of text, and at my reckoning about 408,000 words. That works out to 346 online pages. Here's the challenge ....

I dare you to read the entire book. End to end. All 346 articles. Think you're up for it?

The Reward
Fame, glory, international stardom, an appearance on "Britain's Got Talent', and a major Hollywood film of your life story ... that's your reward. Actually, I may be exaggerating slightly. Your major reward will be enormous satisfaction and a wonderful experience - and you'll learn a lot. Oh, and have your name added to our Roll of Honour list.

The Roll of Honour
I'm going to publish a Roll of Honour list of anyone who reads all 346 pages of A History of the British Nation. Your name will be immortalised for eternity. Now since I can't sit beside you and verify that you actually read the entire book, we have to operate on an honour system, at least in part.

Just for fun, and to help verify that people at least browse through the entire History of Britain, in order to be listed on our Roll of Honour, I've scattered a handful of these cute little medieval king figures throughout the articles. How many? Ah, that would be telling, wouldn't it? That's for you to tell me. Find each figure of a king and make note of the page you found it on. When you're finished the book, send me an email with a list of the pages. If you're right, I'll list your name on the Roll of Honour. Fair enough?

Right, off you go. Enjoy reading, and look out for the kings! 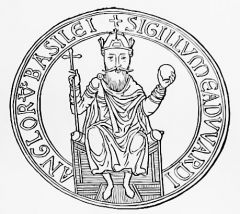 << Cathedrals for the Curious - Life in Elizabethan England | website review >>