A History of the British Nation starts really getting into its stride in its coverage of the so-called 'Dark Ages'. In reality, of course, the Dark ages were anything but dark, though the scarcity of written records means that historians have to work harder to unearth the facts about this long and often violent period in British history. Check our main Dark Ages history section for more on this period. 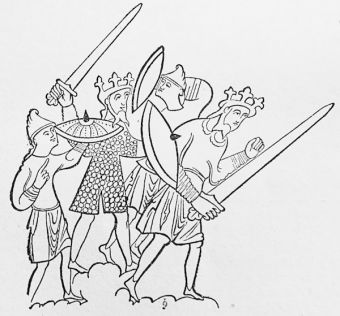 I picked up this wonderful book at a second-hand bookshop in Calgary, Canada, several decades ago. Since it is now more than 70 years since Mr Innes's death in 1938, we can share the complete text of this book with Britain Express readers.

As you read, be aware that some of the author's views may not be accepted by modern historians, but it is worth reading as a period piece of British attitudes in the years leading up to the First world War.

Edward I crowned at Westminster

The coronation took place 20 months after the death of Edward's father, Henry II

This monarch was discovered in captivity by his minstrel


He was held prisoner by the Holy Roman Emperor, Henry VI

The minstrel's name was Blondel