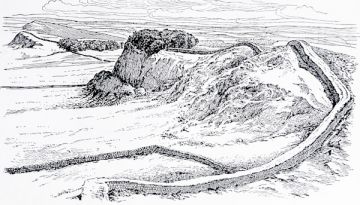 A History of the British Nation has pretty paltry information on Roman Britain, and practically nothing on Britain before the arrival of the legions in 43AD. This section therefore has only three articles, before the book really swings into action in examing the Dark Ages that followed the departure of the Romans. But don't worry if you want more information on Roman Britain - we have a much larger selection of articles in our main Roman History section - written by your humble editor.

I picked up this wonderful book at a second-hand bookshop in Calgary, Canada, several decades ago. Since it is now more than 70 years since Mr Innes's death in 1938, we can share the complete text of this book with Britain Express readers.

As you read, be aware that some of the author's views may not be accepted by modern historians, but it is worth reading as a period piece of British attitudes in the years leading up to the First world War.