HERITAGE HIGHLIGHTS:   Links to Alfred the Great and the Peace of Wedmore 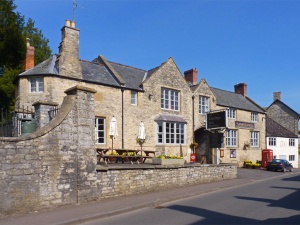 Wedmore is a small village with a large history, standing on high ground overlooking the Somerset Levels, with outstanding views of the Mendip Hills to the east. The village is centrally located for visiting Cheddar Gorge, Glastonbury, and the cathedral city of Wells.

The name Wedmore comes from Old English meaning a hunting lodge or a hunting moor. This area was settled as early as the Iron Age, but the history of Wedmore really begins in the Saxon period when there was a royal estate nearby. Centwine, King of Wessex (reigned AD 676-686) established authority over the region and named it Vadomaer, which, over time, evolved to become Wedmore.

According to tradition, Guthrum and his pagan followers were also baptised at Aller and King Alfred celebrated his victory at Wedmore. Thus, the name Treaty of Wedmore was used by later historians to describe Alfred's victory and the subsequent creation of the Danelaw territory where the Danes ruled. 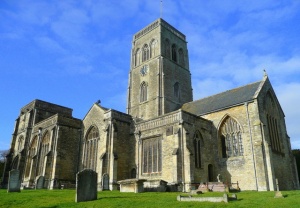 Though there was indeed a treaty between Alfred and Guthrum, it was [probably] not signed at Wedmore - indeed, the name Wedmore is not mentioned in any document about Alfred and his victory over the Danes.

We are on firmer historical ground with what happened next; King Alfred gave the royal estate at Wedmore to his son, Edward the Elder. There was a royal hall and chapel here but these were destroyed in the 14th century.

The Saxons did leave something behind, however; in 1853 a hoard of some 200 Saxon coins was discovered buried in the churchyard. Over a century later in 1988, a 6th-century copper ring was discovered in the village.

At the time of the Domesday Book in 1086, Wedmore was held by the powerful Bishop of Wells.

During the medieval period, Wedmore acted as a regional centre and held weekly markets in addition to an annual fair. 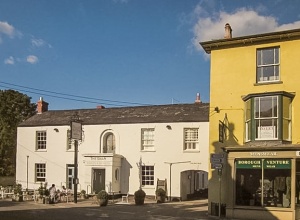 Aside from the church, one of the oldest buildings in Wedmore is the Old Vicarage, built in the late 15th century. Opposite the church is the original Georgian post office building. Another historic building is the George Inn, a 16th-century former coaching inn. One of the most striking historic buildings is the pharmacy, begun as a fashionable Italianate house in 1830.

Porch House dates to the middle of the 17th century and was the home of Dr John Westover, the local physician. In 1680 Westover opened the first private lunatic asylum in Britain, drawing patients from across the West Country. Westover was ahead of his time, for he treated his patients humanely, and made sure they had creature comforts like tobacco and playing cards.

The main shopping street is The Borough, which began in the 12th century as a market. At the widest point of the street is the original 14th-century market cross.

Wedmore's parish church dates to the 15th century, though you can still see stonework from the 12th and 13th centuries. Historical highlights include a 14th-century octagonal font and a medieval parish chest. The pulpit is Jacobean and features a sounding board, while the altar is an original medieval stone slab.

There are several large wall monuments including one to the Boulting family dated 1622. There are two memorial brasses; both to members of the Hodges family. The oldest dates to 1583 and commemorates Thomas Hodges while the second, in memory of George Hodges, is dated 1684. above the pulpit is a 15th-century wall painting of St Christopher.

In the churchyard is a Grade II* listed 15th-century cross on a circular plinth.

On Sand Road is the Methodist Church, built in 1817, while on Grants Lane is the redundant Baptist Church, which opened in 1857 but closed in 2010 due to falling attendance.

In recent years Wedmore has become famous for its annual Turnip Prize, a deliciously funny answer to the Turner Prize that recognises hilariously bad artwork. The winning ... or should that be losing ... entries are put on display in the New Inn on Combe Batch. The village also holds a real ale festival in September to raise money for local charities.

Wedmore is an excellent base if you love nature. There are walks across the Levels, and the Westhay Nature Reserve is just a few miles away.

Wedmore is on the B3139 halfway between Highbridge and Wells. There is a free village car park at 9 Worthington Close off Cheddar Road. Use the postcode BS28 4EE.

More self catering near Wedmore

More bed and breakfasts near Wedmore 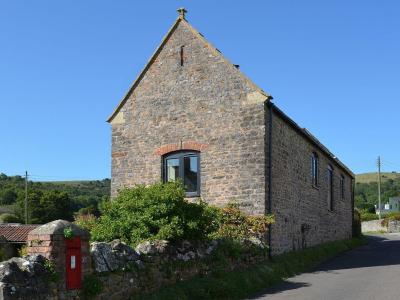 This pretty cottage is situated on the edge of the Somerset village of Compton Bishop and can sleep two people in one bedroom.
Sleeps 2 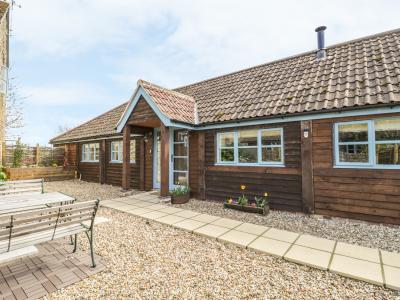 This detached converted barn rests on the fringes of Yeovil and can sleep four people in two bedrooms.
Sleeps 4