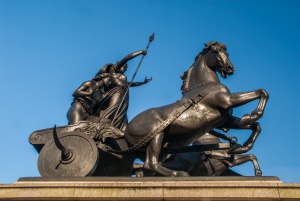 Trouble in Anglia
In 60 A.D., while Roman troops were busy in the final battle with the Druids on Anglesey Island (Wales), trouble arose in East Anglia. To understand what happened, you have to go back to the idea of client kingship. The Iceni tribe, centred in the modern Norfolk, had reached an accommodation with the Romans, keeping their own territory in exchange for not making a fuss.

Beginnings of the Revolt
The Iceni king, Prasutagas, decided that it would be prudent to make his will assigning half of his personal property to the Roman emperor. When he died the Roman officials decided to interpret his will as a submission to the Roman state, so they moved to appropriate all of the Iceni lands and disarm the tribe.

Prasutagas's widow, Boudicca (or Boadicea as she is sometimes known) protested. The Romans had her flogged and her daughters were raped. This high handed treatment of an ostensible ally had predictable results. Queen Boudicca raised the Iceni and the neighbouring Trinivantes tribe in revolt against Roman rule.

The Course of the Conflict
They struck at symbols of the Roman occupation, and they weren't gentle. The capital at Colchester was burned, as was London and Verulamium, near modern St Alban's. Boudicca's treatment of her enemies was fierce and she must have given the Romans a terrific scare.

One legion was so terrified that they refused to move against her. She was eventually brought to bay at an unknown site by a much smaller force of Roman troops. The battle turned against her when the Celts became entangled with their own camp followers and were massacred. Boudicca herself took poison rather than face capture.

Consequences of the Revolt
The upshot of the Boudiccan revolt was that Iceni territory was ravaged and much of the province was put under military rule. There is a tendency to think of Boudicca as a great patriotic leader of the British, perhaps the first national heroine. But, honestly, she isn't a very appealing character. She exacted indiscriminate and ferocious vengeance on many of her fellow British Celts who had the misfortune to live in the wrong place.