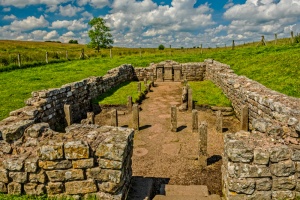 The Roman occupation unquestionably had an effect on Britain, but it is easy to overstate how widespread the effect was. Although the form of life changed for some people, the essence of Britain Celtic society was altered very little. Why? Let's have a look.

Administration
One of the first things the Romans did was to involve the conquered tribes in the administration of the province. They set up administrative centres according to traditional tribal territories and involved the tribal aristocracies in the decision-making process. This was standard Roman practise, and a wise one. They made the conquered people responsible for their own administration within a Roman framework. It was part of their plan to bring the benefits of civilization, Roman style, to other peoples. It worked, for the way to prestige and social advancement was through the Roman bureaucracy.

They encouraged the ruling class of Celtic aristocrats to build town dwellings, and they made the towns centres of vibrant commercial activity. As elsewhere in the Empire, the local "councils" in the towns were encouraged to build civic buildings as a mark of civilization. There was no standard plan to adhere to, so there was a great deal of local variation in the way that the towns interpreted the Roman ideal.

The Romans built towns in lowland areas, such as at fords across rivers, in contrast to the earlier Neolithic and Iron Age practice of sticking to the slopes and higher ground above the valleys. Town boundaries, unlike military forts, were not laid out in rigid rectangles or squares, but they did contain a regular grid-like network of streets. Most towns were walled, though at first, the walls would have been no more than earthen banks with ditches.

By the 3rd and certainly the 4th century the earthen banks were replaced by stone and masonry. The centre of a Roman town was a forum, or civic centre. Usually an open square or rectangle with colonnades, the forum gave access to the basilica, or town hall. It was here that courts of justice were held, though it could also be used as a merchants assembly.

Town life was a real social revolution for the largely rural Celtic society. Those who aspired to the wealth and prosperity that came with the Roman occupation threw themselves into life in the towns. 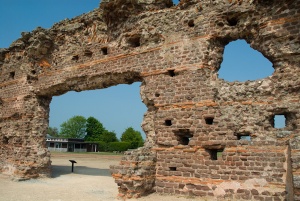 Public Baths
Every town had public baths. The baths were a Roman institution, and most town dwellers would have attended daily before their evening meal. They were open to both sexes, though at different times of day, and served as a combination health club, healing spa, and meeting place. The order that people went through the baths seems to have been up to the individual, though they were generally arranged in the order of exercise area, disrobing area, cold, warm, and hot rooms. Some baths further divided up the hot rooms into steam and dry heat areas.

Public Entertainment
Many towns also offered the entertainments of the theatre and amphitheatre. The theatre, an open-air tiered clam-shell, would have offered fare from classical plays, pantomime, and religious festivals.

The amphitheatre, an open-air oval, would have appealed to a less discriminating taste, offering gladiatorial combats, contests between men and animals, and public executions. The number of theatres and amphitheatres in Britain is small, so these particular entertainments may not have been so popular.

Roman Roads
Joining the towns together were the Roman roads. Over the course of the occupation, the Romans built over 9600 kilometres of roads in Britain. Although, contrary to reputation, they weren't always straight, they were amazingly well built, and made troop movement and later the movement of commercial goods much easier. The imperial posting service, used by Roman officials, maintained inns and relays of horses at intervals of 30 to 50 kilometres along the roads.

The roads were literally highways, raised up on a cambered bank of material dug from roadside ditches. They were constructed in several layers, the final layer generally being gravel or flint, and reached from 4 to 8 metres wide. Click here for a more thorough look at Roman roads

Villas
Aside from the towns, the other sign of Romanised civilization was the growth of villas. In Latin the word villa means simply, "farm", so technically villas were any form of rural agricultural dwelling built in a Roman style. In practice, though, when we speak of villas we mean the country estates of the Romanised British elite. Although at first the conquered tribal aristocracy may have been drawn into towns, it wasn't long before they began a "back to the land" movement.

Most large villas are built quite close to major urban centres, generally within ten miles, so the owners were never very far from the centre of affairs. Villas were more than fancy houses, though; they were centres of rural industry and agriculture. In one complex they could hold the landowner and his family, overseers, labourers, storehouses, and industrial buildings. Although some may have been strictly the centre of large farms, others included industry in the form of pottery and metalworking.

Individual houses were as different then as they are now, but the villas followed some general patterns. They were half-timber frame houses on stone foundations, one story in height, capped with slate or clay tiled roofs. Underfloor heating systems were universal, though in one intriguing case the system was never fired up. Tile floors were common, and most larger villas contained at least one room with a mosaic floor. Walls may have been decorated with mosaics or painted scenes. Furniture was made of wood, in patterns similar to Roman style throughout the Empire. Many villas also had separate bathhouses.

The golden age of the villa in Britain was in the 2nd and 3rd centuries. After that, they fell into disuse or were taken over for other purposes.

Trade
Industry in various forms was encouraged by the Romans. In their bid for the veneer of civilization the elite of Britain imported Roman wine, jewellery, and pottery. In return, they exported cattle, grain, lead, iron, tin, and, curiously enough, hunting dogs. The local pottery industries throughout Britain flourished, as did ironworking. The large standing Roman army in Britain, as many as 40,000 troops for long periods of time, was a natural market energizer for British industry, and the extensive Roman road network helped speed the transport of goods throughout the island.

The observant reader (this means you) will have noticed that most of the talk so far has been about how the upper classes lived. Certainly, most of the remains that have been excavated and analyzed pertain to them. How did the rest of the British Celts manage? Probably with a great shrug.

Despite the growth of towns and bureaucracy and all the other essentials of civilization that came with the Roman conquest, the lot of the majority was unchanged. Britain was an agricultural province, dependent on small farms. The lives of the farmers changed very little. They still built round Celtic huts and worked the same fields in the same way. Their standard of living changed little, if at all. Despite the veneer of Roman civilization, Britain was still largely a Celtic, or even a Neolithic society.