The beginnings of London can be dated with some exactitude to the invasion of the Romans in 43AD. Prior to the Roman invasion there was no permanent settlement of significance on the site of London. Instead, the Thames River flowed through marshy ground sprinkled with small islands of gravel and sand. There were probably more mosquitoes than people inhabiting the area. 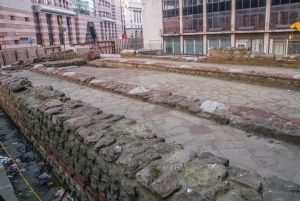 The Temple of Mithras

The commander of the Roman troops was one Aulus Plautius. He pushed his men up from their landing place in Kent towards Colchester, then the most important town in Britain. The Roman advance was halted by the Thames, and Plautius was forced to build a bridge to get his men across.

This first "London Bridge" has been excavated recently, and found to be only yards from the modern London Bridge!

The Roman bridge proved a convenient central point for the new network of roads which soon spread out like a fan from the crossing place and allowed the speedy movement of troops. The Roman settlement on the north side of the bridge, called Londinium, quickly became important as a trading centre for goods brought up the Thames River by boat and unloaded at wooden docks by the bridge.

Just 18 years after the arrival of the Romans, Boudicca, queen of the Iceni tribe of present-day East Anglia, launched her rebellion against the new rulers of Britain. The new trading centre of London was one of her primary targets, and her warriors levelled the burgeoning city to the ground and killed thousands of the traders who had begun to settle there.

The city was quickly rebuilt, with a cluster of timber-framed wooden buildings surrounding the imposing Roman civic buildings. The city continued to grow in size and splendour over the next century, reflecting the increasing importance of trade in Britain.

By the middle of the second century AD, Londinium possessed the largest basilica (town hall) west of the Alps, a governor's palace, a temple, bathhouses, and a large fort for the city garrison. Gracechurch Street, in the City, runs through the middle of the old Roman basilica and forum (market place).

One of the best Roman remains in London is the 2nd century Temple of Mithras (Mithraism was a form of religion popular among Roman soldiers). It was found near Walbrook during construction work in this century, and moved to Temple Court, Queen Victoria Street. Artefacts recovered from the excavation of the temple are now in the Museum of London.

About the year 200 AD, a defensive wall was built around the city. For well over a millennium the shape and size of London was defined by this Roman wall. The area within the wall is now "the City", London's famous financial district. Traces of the wall can still be seen in a few places in London.

London continued its growth under the late Roman Empire, and at its peak, the population probably numbered about 45,000. But, as the Roman Empire creaked its way to a tottering old age, the troops defending London's trade routes were recalled across the Channel, and the city went into a decline which lasted several centuries.

What to See:
Temple of Mithras
Museum of London