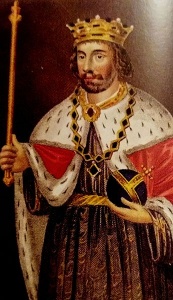 Edward II (1307-27) was a poor king, bored by the responsibilities of his position and easily swayed by a succession of male favourites. The first of these was Piers Gaveston. He was seized in Edward's absence by rebellious nobles and summarily tried and executed. The barons forced Edward to agree to reforms in their favour. In 1314 Edward lost the Battle of Bannockburn to Robert the Bruce and Scotland gained its independence.

Edward's End
Hugh le DeSpenser was Edward's next favourite and he, along with his father, also named Hugh, were virtual rulers of England from 1322-26. Edward's queen, Isabella, finally had enough and raised a rebellion with French aid. She and her lover, Roger Mortimer, defeated and hanged the DeSpensers and forced Edward to abdicate in favour of his son. The ex-king was kept at Berkeley Castle(Gloucestershire) until brutally put to death in 1327.

Edward III (1327-77) was only 15 when he came to the throne. Isabella and Roger Mortimer ruled as regents for three years until Edward rebelled and had Mortimer hanged. Edward proved to be a popular, approachable king. 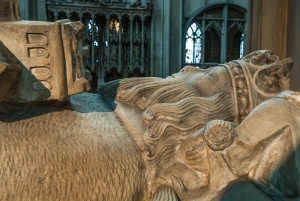 In 1337 he began the conflict with France known as The Hundred Years War. Actually, it lasted, on and off, for 116 years, and despite early successes at Crecy and Poitiers, it was to end with the loss of virtually all English possessions on the mainland.

Parliament's Power
As is usual in times of war, Parliament grew in power, forcing royal concessions in return for grants of money. During Edward's reign, the custom evolved of separate sittings for the Commons (burgesses and knights) and a Great Council of prelates and magnates. The system of Justices of the Peace, chosen from among the local nobility, also dates from this time. They became a sort of amateur body carrying on local administration and government for the next 500 years.

"Achoo, Achoo, All Fall Down..."
In 1348 the Black Death reached England. So named for the black tumours which appeared in a victim's armpits and groin, this flea-borne disease was carried to an unprepared Europe by rats on ships arriving from the Far East. The effect of the Black Death on England and the rest of Europe cannot be overstated. In some places up to one-half of the population died. This accelerated tremendous social change.

Social Changes
There was a drastic shortage of labour on the land. Many landowners began to enclose their lands, turning to sheep raising rather than labour-intensive traditional farming. Increased sheep farming meant that fewer farm labourers were needed, so lords often allowed villeins to purchase their freedom from feudal obligation. The villeins became free labourers, and many gravitated to towns.

Langland and Chaucer
The first great literary work in the English language appeared in 1362, William Langland's Piers Plowman, which was an indictment of social inequality and injustice. Langland was followed a few years later by Geoffrey Chaucer, whose Canterbury Tales remain a vivid and insightful look at medieval English society.

Wycliffe and the Lollards
In a more serious vein, it was about 1376 that John Wycliff began to preach church reform, espousing the radical notion of an individual connection with God, without the necessary intermediary of church ritual. Wycliffe's followers, called Lollards, were constant agitators for social and religious reform for the next 50 years.

John I crowned at Westminster Abbey

John had already been anointed Duke of Normandy after the death of his brother, Richard I