Richard the Lionheart, King John, and the Magna Carta 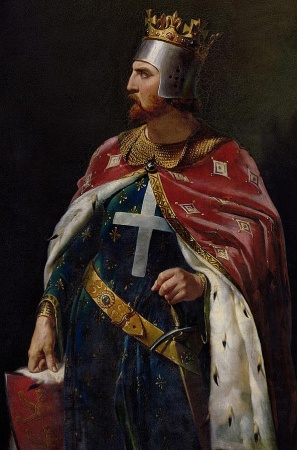 A romanticised 19th-century
portrait of Richard I

Lionheart
Richard (1189-99) is known to history as "Coeur de Lion", or Lionheart, because of his bravery in battle. He was without a doubt a great warrior, but he was a very poor king for England.

In his ten-year reign, he spent only ten months in England, and that only to raise money for his foreign wars. He fought brilliantly and cruelly in the Third Crusade and was captured on his way home by a personal enemy, Leopold of Austria.

King John was reluctant to pay the ransom, and it was left to the Dowager Queen Eleanor, and Hugh Walter, the Archbishop of Canterbury, to raise the required £60,000 to free Richard from his captivity.

Richard was freed only to die a short time later fighting in France. Richard's later popularity rests as much on romantic wishful thinking as it does on facts. During his reign, however, the first known merchant guild was founded, in 1193. The guilds were to play a major role in medieval society, as we shall see.

"King John was not a Good King..."
Whereas Richard exhibited little interest in his responsibilities as a king, John (1199-1216) exhibited too much. A bad press over the years has portrayed him as a villain, and the sad truth is that John was really not a very good king. He was greedy, a poor administrator, and a poor warrior.

In 1204 he lost all the lands north of the Loire to Philip of France. This had the effect of severing the Norman aristocracy of England from their continental possessions. They were forced to turn all their energies and attention to England, where they began to flex their muscles.

The Magna Carta
The rebellious attitude of the great barons led to an inevitable confrontation with John. In 1215 the barons were powerful enough to force John to sign the Magna Carta (Great Charter).

Contrary to later opinion, the Magna Carta was not an outline of universal freedom and democracy. It was a document which bound the king to observe common law and tradition, particularly where it affected the rights and privileges of the nobility. It put the crown directly under the thumb of the law, rather than vice versa, as John would have it.

It did have several clauses that were later interpreted in ways that led to a definition of democratic freedom and the rights of the individual under law.

It is rightly regarded as the basis of the modern English constitution, but at the time it was little more than a power grab by the barons.

John tried to repudiate the Charter as soon as he was out of the barons' control. Their struggle continued until the following year when John died after bingeing on peaches.

Related:
Back: Henry II and Thomas a Becket
Next: Henry III and Edward I

This monarch came to the throne at the age of 18